Taking a walk down Quality Street to dissect the residents of the holiday season’s most iconic coffee table treat.

There’s nothing blatantly festive about Quality Street, it’s actually available year-round though for some reason it tastes like a certain time of year. But these days it’s as common a Christmas ornament as a poinsettia, decorating office front desks and grandmothers’ coffee tables, a perfect afterthought gift and guaranteed conversation starter. So as an ode to the iconic treat, converse we did, picking apart the entire tin only to agree on one thing—it’s good enough but like most holiday candies, we eat it because it’s there.

Milk Chocolate Block
True say: Quality Street is rather low-end chocolate, thin and chintzy and slightly off, as if there were some Stevia in it. Choc Block is the best chunk of chocolate you can hope for here. Satisfying snappy bite, tastes good too.

Strawberry Delight
Doesn’t matter what box of chocolates you’ve got, cream-filled ones are a crapshoot. The same folks passing over Orange Creme’s cloying Cadbury Egg taste are drawn to Strawberry Delight’s nostalgic charm. Smelling like a Strawberry Shortcake doll and tasting like a literal mouthful of syrup—actually, now I’ve talked myself out of it. 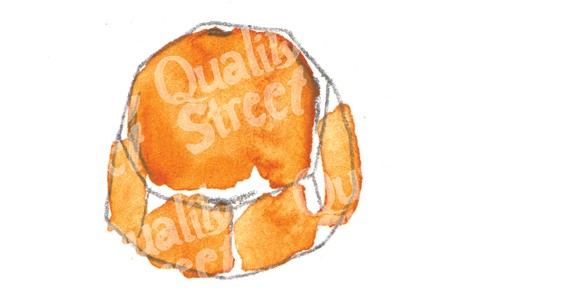 Orange Crunch
Come at me orange chocolate-hating chocolate reviewers! Put aside the cartoonish fruit/chocolate combo for a second to recognize that texture is what makes this eight-sided sucker rule. A little crunch is a welcome change in a sea of cream filling and sugary caulking.

Toffee Deluxe
The Nestle kingpins apparently discontinued this filling remover in favour of introducing a new sponge toffee varietal (Honey Comb Crunch, which upon investigation hasn’t arrived in Canadian tins) and people freaked out. “Too many toffees” was the response to the swap, which is the truest.

Toffee Finger
Possibly made from Twix run-off, the Toffee Finger feels like a victory snag probably because it’s long and gold, a shiny baton. “Chew on this,” it says. So you do. 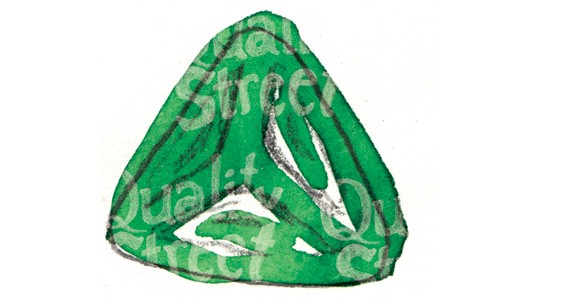 Hazelnut Triangle
There’s some Illuminati shit going on with this guy. Standing out from the rest of the blobby-shaped pack is this equilateral resident of Quality Street’s Upper East Side. Its creamy, hazelnut praline texture is a little bit Icy Squarish, a welcome escape from the choco-monotony. 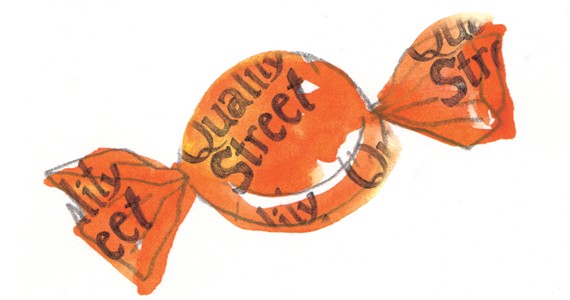 Orange Creme
TWO orange flavours in one can? Skip this junk and hit up Sir Terry if you need a damn chocolate orange—the Orange Creme tastes like the fluoride treatment we used to get from the travelling school dentist in the ’80s.

Coconut Eclair
You’re either team coco or not, that’s understood. However, if a slightly drier Bounty is what you crave, this is a decent alternate. It’s substantial. A desert island chocolate. A perfect superfood.

Toffee Penny
Do you have a wobbly table whose leg needs steadying? I’ve got just the thing. This sticky nightmare is good if you really need to craft something quick out of putty—nothing more. This is a box of CHOCOLATES yet this contains no CHOCOLATE. Actually Nestlé uses child labour on their cocoa farms so maybe it’s best to refuse the whole tin and blame Toffee Penny if you don’t want to get into it with grandma. She will understand, I’m sure.

Chocolate Fudge
This pink clad waste of space can be seen chilling in the bottom of the tin with the other outcast rectangles (cough Toffee Deluxe, cough Coconut Eclair) come January 1. Chewy subpar chocolate coated in subpar chocolate does not a treat make.

Caramel Cup
As with most of these it makes you think of the better chocolate you could be eating (Caramilk!). QS has been produced in the same British factory since the 1930s, and they did not have any fucking caramel cups in the ’30s. No new crap, just the hits.

Hazelnut in Caramel
The fact that this has a FULL HAZELNUT inside is like gilding the lily, tbqh. Quenelle-shaped milk chocolate, impossibly liquid caramel and a damned full hazelnut? You crazy for this one, QS.