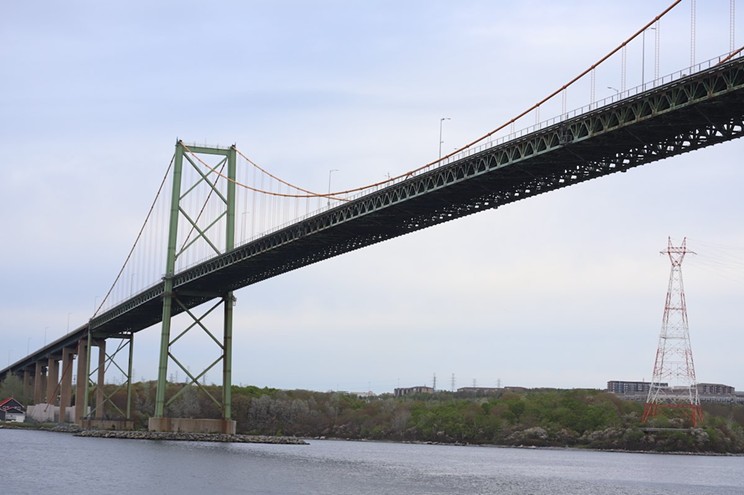 The Coast
Officials say the MacKay Bridge can't handle the weight of suicide barriers—the same excuse they gave before adding barriers to the Macdonald Bridge in 2009.

Decals were recently added to cover 72 feet out of 2,400 feet of guard rail.

Amanda Dodsworth doesn’t drive across the MacKay Bridge anymore. Not since last spring. “I cry a lot when I do,” she says. In late March 2021, one of her closest childhood friends died by suicide, jumping from the bridge that looms 55 metres over the northern end of Halifax Harbour.

Two bridges have spanned the harbour for decades: The “old bridge”–the Angus L. Macdonald–since 1955, and the “new bridge”–the A. Murray MacKay, since 1970. Neither is actually new anymore, and they show it. The steel bridges are weathered and rusted, crossed by more than 100,000 vehicles on an average day, making for more than 26 million crossings a year. But despite the cosmopolitan interconnectedness the bridges bring to HRM, they each harbour tragic stories.

Adam's fall: The Macdonald Bridge is a suicide hot spot, counting Adam Cashen among its victims. But as this award-winning story shows, "means reduction"—a suicide barrier—would make the bridge safer.

In 2008, The Coast published a feature story on Adam Cashen’s death by suicide from the Macdonald Bridge. The following year, the Halifax Harbour Bridge Commission (HHB) announced the installation of million-dollar, nine-foot-tall suicide barriers on the entire length of the Macdonald.

But the same thing has never happened on the MacKay.

A few weeks after her friend's passing, Dodsworth began reaching out. First to a city councillor, then to HHB. “I was kind of just flailing trying to grab something because I was grieving so hard,” she says. “What can I grab to make that grief feel like it has some kind of purpose?"

The original goal was to try to get some sort of barrier installed. “The railings on the MacKay are like, to my waist,” Dodsworth says. When her friend jumped, “people on the bridge said he didn’t break his stride.”

But the bridge commission quickly responded that the structure couldn’t handle any excess weight. It said the same thing in 2004 and again in 2008 before the Macdonald Bridge barriers were added.

She began corresponding with the HHB communications representative at the time, Alison MacDonald, to come up with solutions. And while the response was sympathetic, Dodsworth began to sense “a little bit of, ‘it's not that big of a problem,’ the downplaying of ‘it doesn’t happen as often as you think it does.’”

However, the occurrence of suicide attempts or completions relating to the MacKay Bridge can’t be pinpointed, since the HHB refuses to release that information. Despite a 2019 decision by the Office of the Information and Privacy Commissioner that ruled the commission has to release broad statistical information about suicides with identifying details removed, the information has still never been made public.

Dodsworth continued to communicate with HHB throughout spring 2021. After a few weeks of discussions about what couldn’t be done—“they don’t allow memorials on the bridge because they don’t want people who might be in some level of distress to see that and think maybe that’s my way out too”—the bridge commission accepted a suggestion of adding suicide prevention decals to the MacKay.

“There will be several closures of the MacKay Bridge this summer—the perfect time to put the decals on the bridge,” MacDonald wrote to Dodsworth on June 10.

The decals would be raised and textured. “So that if someone did touch the railing, they would feel a little bit different than what they would anticipate the metal railing to feel like,” says Dodsworth.

But in early September, Dodsworth emailed HHB to get an update on the progress only to find out that MacDonald had left the position and a new communications manager, Steven Proctor, had taken her place.

“I started from scratch again,” says Dodsworth. Proctor told her HHB had never confirmed decals would be installed, despite her emailed screenshots proving it.

“Essentially, he insinuated that I was lying,” Dodsworth says.

Defeated, Dodsworth took a break from her efforts for the better part of a year, until this March when she emailed HHB again just after the one-year anniversary of her friend’s passing.

“He got back to me a week later and said, ‘we tried to put some decals down and they didn’t stick well,’” she says.

Proctor confirmed to The Coast that HHB has recently applied six 12-foot decals along the mid-span of the MacKay. The safety messaging was created with help from the Canadian Mental Health Association’s Nova Scotia chapter, but Proctor says photos cannot be provided because “we do not want people interrupting the flow of traffic to take a look at them.”

The decals have one of two messages, either “You are not alone. You matter. There is help,” or “You are important. You can survive beyond this place. It’s okay to ask for help,” followed by the number for the mental health crisis line and 911.

“It sounds really great,” says Dodsworth. “But they produced six 12-foot decals, three for each side of the bridge. The bridge span is over 1,200 feet, and they produced 36 feet of decals per side.”

Dodsworth offered to fundraise for more decals to be printed, but HHB hasn’t taken her up on the offer of expanding this small first step.

“Step two would be the signs coming out from under the railing, so if you were looking over the railing, you would see those signs. Step three would be safety netting put up.”

She knows it’s not going to prevent every death by suicide, but it might help someone. “The point is not to fool ourselves into thinking that we can save every person, because it's not realistic,” she explains. “But if we give people a moment to pause, then it's either a chance for another human to connect with them, or it's a chance for them to be like, ‘wait, what am I doing? I don't really want this right now.’”

If her friend had that chance, he might still be here. “How can we take what happened to him and turn it into hope and care for somebody else?” Dodsworth asks. “If he had to climb, would he have gone through with it? Or would there have been time for somebody to stop him?”

Although she knows the subject stirs up difficult emotions, Dodsworth wants suicide to be talked about more openly. “People who are feeling that way feel even more alone, because they feel like nobody’s talking about it,” she says. “We can not talk about suicide, and it doesn’t go away. Even when we talk about it, it doesn’t go away. But ignoring it isn’t changing anything either.”