The mural of the story

Freak Lunchbox’s massive new artwork is done, here’s a look at the work that went into it.

Hate it or love it—or just love to debate about it—Barrington Street has a brand- new, big, bizarre and beautiful mural. Freak Lunchbox’s decision to commission a massive piece of art for the side of its new headquarters surprisingly ended up being one of the summer’s most argued-about topics, and amidst all of the opinions hurled in its direction the downtown candy shop awarded Montreal-based artist (and master of large-scale work) Jason Botkin the opportunity to create something equal parts Freaky and Halifax. In under a week, he transformed the north-facing wall of the shop’s headquarters from a blank slate to a showstoppingly vibrant water world. 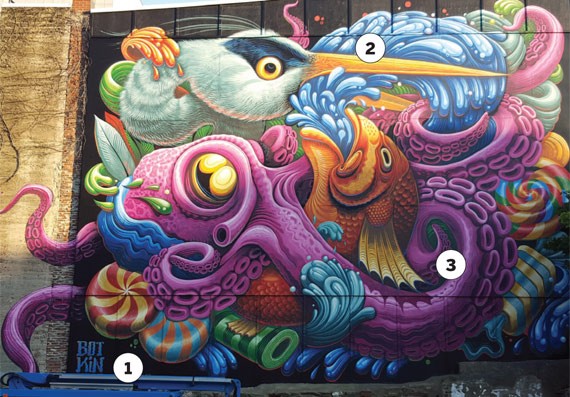 1.“My son, who’s 12, his favourite store in Montreal is Freak Lunchbox,” says Botkin, whose meaty proposal of many drawings won over owners Erin and Jeremy Smith. He arrived in Halifax on September 1, the same day his sketches were approved by Heritage Council, and spent two hours outlining his design on the side of the three-storey building. Then he started painting. “It was a very taxing project because I had a very short window to do it in. I was working from 8am to 10:30 or 12:30 at night.”

2.“Original concepts were based the idea of the freak show, a lot of my work is like that anyway,” says Botkin of the design, which also leaned heavily on Maritime inspiration. “I had just gone to this festival called Sea Walls based out of Cancun in Mexico, it’s mandate is environmental concerns with the ocean. We chose something that was in my mind loosely a reflection on some of those concerns. We kind of have this battle royal in a playful, fantastic, surreal way.”

3. “That is the function of art, or a function of art. Obviously it’s not for everybody—if it was for everybody it would cease to be art,” says Botkin, who until overhearing a conversation at a downtown bar, had no clue there was controversy surrounding his would-be mural. “The best thing that could have happened is that it generated important dialogue, and opened up a conversation about change in general, and communication. People were opening up, talking about issues of culture and shared identity.”