The last days of the old Lion's Head

The decades-old tavern will move to its new home next month. Victoria Walton
Nearly fifty years of memories are stored within the walls of the Lion’s Head Tavern. From wing nights and trivia to after-work beers on a Friday to karaoke nights hosted by Laurie The Guy, many Haligonians know the single-storey building on Demone Street—its yellow walls hung with photo frames depicting a Halifax that now only exists in a distant memory—like the back of their hand.

Sometime in October, the Lion’s Head will move into its new location, a modern-looking new build just next door.

Victoria Walton
One of many booths at the Lion's Head adorned with memorabilia of days gone by.
“There’s tons of memories, tons of memorabilia on the walls, signs from old Halifax and sports teams that used to come here and were sponsored by the Lion’s Head,” says Michael Hage, whose family has owned the tavern since 2010. Hage is the namesake of the former Michael’s Bar and Grill on Young Street, owned by his father Eli, which shut its doors to make way for a new development in 2014.

Before the Hage family owned the Lion’s Head, it was run by original founder Alan Chandler for almost 40 years. Chandler passed away in 2012.

“He had many restaurants in the city but this was his favourite, he held on to it until the end,” says Hage.

Victoria Walton
Gerry Duffy (left), Heather Roach and Michael Hage say they won't miss the building itself, full of leaks, cracks and problems.
Now, the Lion’s Head will see a similar fate: a new, 10-storey building was approved in 2018 for the site, with space for retail and more condos in the city’s growing north end. This building will be constructed by M.G.B.E Real Estate, also owned by the Hage family. “We believe in the area,” says Hage, remarking how much it's grown in recent years.

The old Lion’s Head will remain open as long as possible, but the new three-level building is almost complete: The tavern’s new logo is already on the building and construction fencing came down in early September.

“It was supposed to be around Canada Day, that was the original, that’s what we were shooting for. But just the way with the Covid and all that stuff and the uncertainty of when we’d be able to open, there was really kind of no rush to get construction completed, so we kind of just took some time with that and now we’re just trying to get that door open,” says Lion’s Head general manager Gerry Duffy, who's been with the Lion’s Head since 2010, and worked at Michael’s before that.

Duffy says the first floor of the new building will do its best to re-create the Lion’s Head as it exists now: dark wood panelling, yellow walls, TVs where you can watch the game.

“I mean a lot of the folk art I think is going to be getting moved. It’ll all depend on exactly what will fit, how much of it will fit in there and how much space we have,” he says. 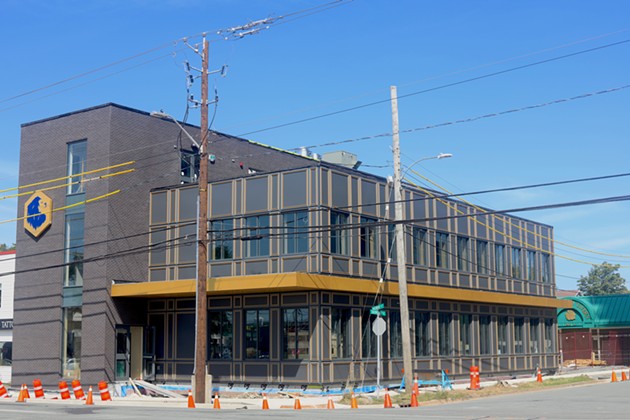 Victoria Walton
From Robie Street, the new Lion's Head overshadows its predecessor.
But the upper level will be a new look for the old tavern. A bright space that caters to a new type of north end: one going through the slow but persistent process of gentrification.

“The second floor is a whole new concept. So, it’s more lighter colours, and it’s a flexible space so it can be used to host any type of event really. We have a VIP room upstairs for events that are up to 30 people,” says Hage.

The 18,000 square foot space will be much different than the Lion's Head my 20-something mother spent nights at in the ’80s when she worked in Dartmouth, and it may not feel like home to the salespeople from the Honda dealership I used to work at down the street, who often grab a beer on a Friday after work.

“We expect a new clientele to kind of, to come in and check it out. People who maybe haven’t been in the Lion’s Head for years, going to check out the new one," says Duffy. "People who basically have heard of us, but never been here, we expect those people to come in.”

The new building will dedicate its basement level to a prep kitchen and staff space, but the remaining floor space will allow for the return of familiarity in the form of dart leagues and karaoke. "I think when people first walk in they’re going to be surprised at how similar it is,” says Hage.

A bar on each floor will have 24 different taps, while the rooftop patio will have 16. The menu will see some changes, but head chef Heather Roach is keeping that a surprise. Victoria Walton
Chef Heather Roach only has a few weeks left until her team moves into a much more modern kitchen.
“We do have some fun things for sure, things that I don’t think the city has seen in this area. And of course, some of the favourites, the fish and chips is staying the same, wing night’s a favourite for sure so that’ll definitely be a regular thing as well,” she says.

However, Hage and Duffy say they don't want to alienate their old customers. The duo says the classics aren’t going anywhere, even as the Lion’s Head tries to cater to a different customer base than the one it opened to in 1971.

“Some people, at first sight, might think well, it’s not their Lion’s Head,” says Duffy. “I’m sure that once we get people in here and they realize it’s still a comfortable place, it’s still a good place to come out and have something to eat and have a drink and have a good time, they’ll keep going.”