Behind the elegant simplicity and tireless work of Bar Kismet’s co-owner and the city’s most exciting chef.

Jessica Emin
It’s when Annie Brace-Lavoie starts her day. The coffee maker is trickling as she begins to pull containers and produce from refrigerators.
A tray of nest-like wheels made of praline-flavoured choux pastry make its way into the oven. After baking they’ll be cut horizontally and piped full of hazelnut creme. Desserts are always done first in the Bar Kismet kitchen, then comes the pasta.

“It’s nice working at something mindless, like second nature,” says Brace-Lavoie, as she passes a thick sheet of pasta dough through a pasta attachment.

She busies herself preparing the kitchen for service, checking that every component is ready. A dry erase board with a list of ingredients, sauces and tasks tells her what’s in store. The staff trickle in as the day goes on, but the morning is solitary.

Brace-Lavoie and her husband, award-winning bartender Jenner Cormier, opened Bar Kismet at the end of summer 2017 and although the cocktails are some of the best in the city, it’s the food that makes the place unforgettable.

“Annie is easily one of the hardest working people I have ever met, in my entire life. Her work ethic motivates me every single day to be better at my job,” says Cormier. “She doesn’t quite understand and is too humble to acknowledge that she is one of the people changing perceptions and raising the bar on dining in Halifax.”

Bar Kismet’s menu wins over guests with layered flavours and great technique. The plating is neither fussy—no tweezers here—nor simple, nonetheless a feast for the eyes.

A melt—an extravagant open-faced sandwich with fontina cheese, tuna mayonnaise, chives and oil on sourdough—shares the page with delicate plates like raw scallops, turnips and lemongrass served in a shell, on ice. Pasta dishes also teeter between rustic and refined. The braised rabbit cavatelli with tomato sauce is familiar with a pleasant surprise of warm spice, while the gnocchi y pepe—a dish of airy pasta pillows coated in hot melted cheese sauce—is simultaneously light and rich with a spicy, cinnamon-like pop from pink peppercorn.

Brace-Lavoie’s dishes are uncomplicated, but not pedestrian; elevated without being pretentious. The food she creates touches on but doesn’t lean on it. 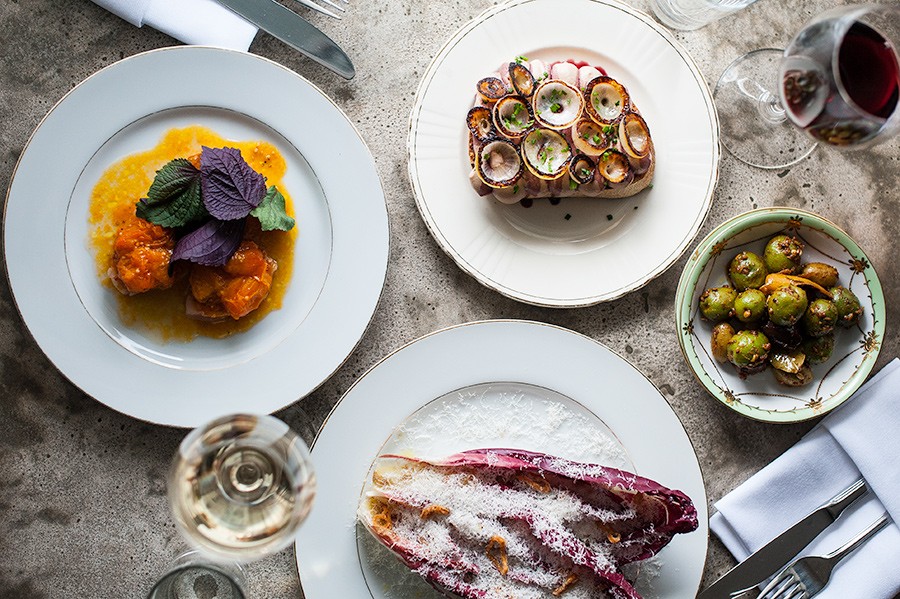 is where Brace-Lavoie spent her early years with her older sister and parents, who met at 19 and married shortly after. Once a nurse and a record store manager, their influence can be found in Bar Kismet’s fine details. A watercolour trout bursting with wild plants and flowers, painted by her mother, hangs at the top of the stairs; the restaurant’s playlists—laced with Fela Kuti, Desmond Decker, Sonny Boy Williamson— are often influenced or constructed by her father.

At 22, Brace-Lavoie left her career in makeup artistry and made a big move to the UK. After some time living in she enrolled in culinary arts at the Leiths School of Food & Wine and was hired at the Gallery Mess restaurant at the famous Saatchi Gallery—despite her lack of experience. It was an entry-level job with few hours and low pay, but she enjoyed it, so she took on a second gig to pay the bills

“I worked seven days a week just to keep my kitchen job,” she says, “otherwise I would not have been able to live to sustain myself.” When tuition and the long hours became too much, she left school.

With a bit of convincing from her mother, Brace-Lavoie moved home to attend the Institut de et d’hôtellerie du Québec, the premier culinary college in Montreal, keeping jobs in pub kitchens throughout her studies.

“You need to have a grinder job to start. You might not learn the French cuts of vegetables, but you learn how to hustle your ass,” she says. “I learned more from all the kitchens and people, and the kitchens they worked in, than any culinary school.”
Her post-education resume reads like a list of the best restaurants in Canada: First Buca, then Liverpool House, Nora Gray, Buca again, Bar Isabel and finally Bar Raval, where she worked until moving to the east coast in 2016.

“I was super- impressed by her,” Brace-Lavoie says of Cardarelli. The culinary staff at Nora Gray consisted of just four people working five days a week, always together. It was like a family. “What I learned from that kitchen is that I wanted something that would be small and intimate.”

Brace-Lavoie’s past experiences have also influenced her current menu. Buca and Nora Gray are known for their pasta, and now Bar Kismet is too, keeping three noodle dishes—a dumpling-style pasta, stuffed pasta and extruded pasta, like cavatelli—on its menu.

“No matter how simple or extravagant the dish may be, there is always an overwhelming sense of comfort that comes from pasta. Pasta is also an incredibly satisfying thing to make by hand. It is steeped in tradition and history, which I absolutely love,” she says. “Making great pasta by hand involves repetition and intuition. It requires a ton of patience and motivation, but the end product is certainly worth it.”

Brace-Lavoie’s intuition also led her to home in on seafood, which is why you will rarely find meat (beyond sweetbreads or liver) on Bar Kismet’s menu.

“We make a big effort to find and use fish or shellfish that are slightly less common in restaurants,” she says, shouting out hake, bycatch like monkfish and skate, and her personal favourites sea bream and sea bass. “They’re my favourite fish to work with because there’s more challenge involved in creating dishes with them.”

“Our treatment of fish and shellfish revolves heavily around preserving the integrity of the species itself. Oftentimes that means minimal manipulation and the use of only the freshest ingredients. When you have delicate and incredibly fresh fish, you want that to be the main attraction. It does not need an abundance bells and whistles.” 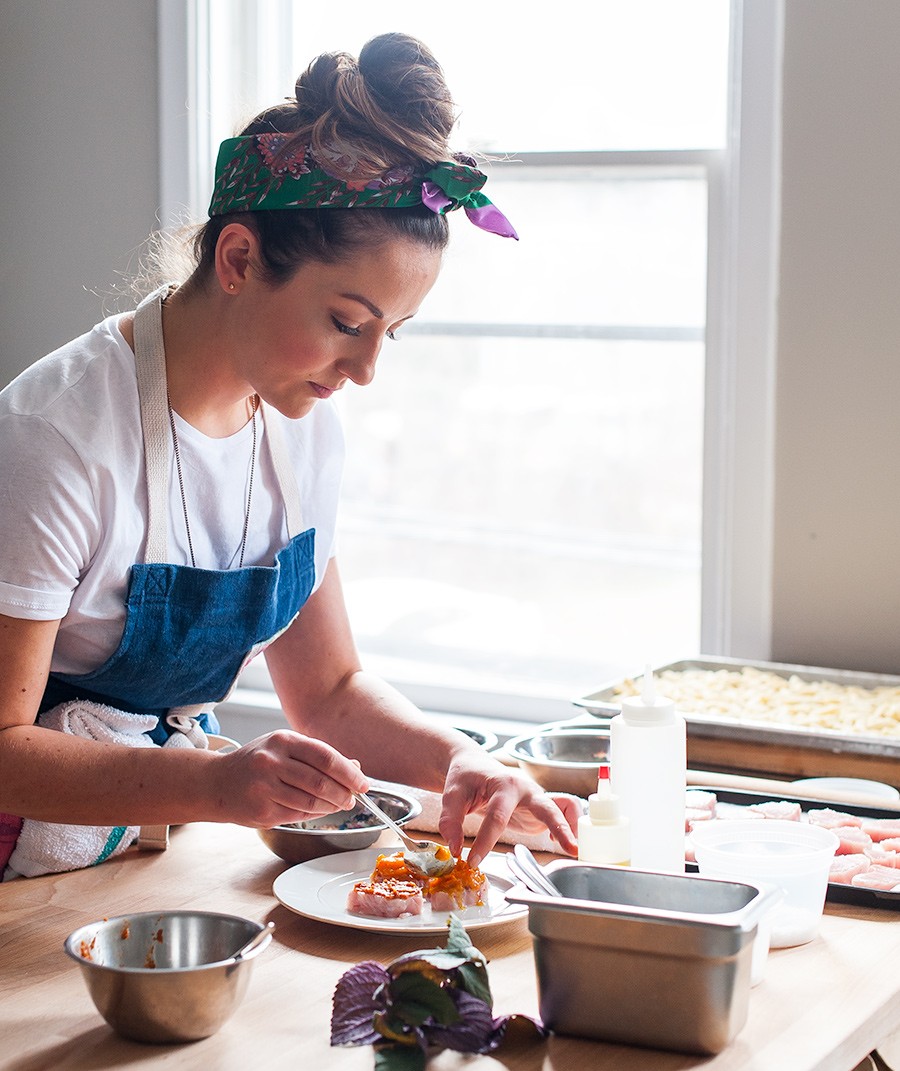 of thin, small, square sheets of pasta dough cover a large stainless steel table. Damp towels cover most of the pasta so it won’t dry out. Brace-Lavoie spoons creamy corn into the middle of the squares and closes them to make a dumpling that resembles a small tent—it’s corn . Each piece of pasta carefully pinched, manipulated, sealed and placed in a box for later.

“Pastry is a direct science, but pasta, if you follow a recipe, you’re going to screw it up 50 of the time because you need to know what it’s supposed to feel like,” she says. “I’ve been obsessed with noodles forever, I watch old Italian ladies making pasta on YouTube.”

It was December of 2014 when Brace-Lavoie met her now-husband and business partner at Bar Raval. She was set to work days in the kitchen, but when she got to know Cormier, who was working nights, she asked for her schedule to be changed.

The pair moved to Halifax, Cormier’s hometown, in January 2016 with the end goal of starting something of their own: An institution that celebrated quality ingredients and unwavering hospitality.

This past summer, she and Cormier married, around the one year anniversary of Bar Kismet’s opening, with a private beach ceremony.

“You always hear people talking about strong men having stronger women behind them in life,” says Cormier. “In our scenario, we stand side-by-side and fuel each other’s fire to push forward.” 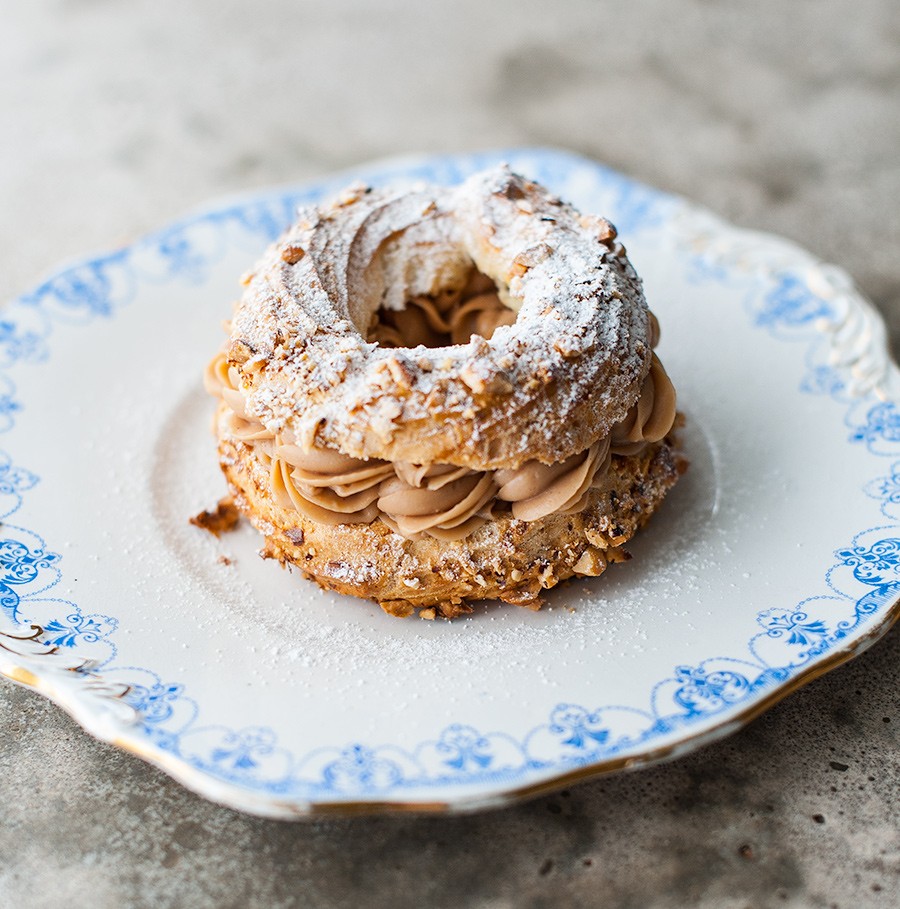 Jessica Emin
A hazelnut-creme-filled Paris-Brest
In just over a year in business, Bar Kismet was named one of magazine’s best new restaurants in Canada, earned many glowing reviews online and wooed celebrity food personality and voracious eater Matty Matheson, who after a visit a few months back posted an Instagram story with a clip of Brace-Lavoie saying: “Best chef in Canada.”

She’s flattered, but there is a humility and a lack-of showiness to Brace-Lavoie. She talks about herself only when it’s pried out of her. She has set a new bar for food and service in but never boasts.

“I don’t think it’s necessary to walk around in the world patting yourself on the back every day,” she says. It has never been part of her plan to receive attention, the goal is to make a doing what she loves by the ocean.

For her now that means six days a week, 12 hours—more or less—a day at Bar Kismet. Soon she and Cormier will start taking two days off a week—something that for many restaurant owners is rarely a reality—because of their trust in the team. “It’s about giving people a certain sense of control,” says Brace-Lavoie. “If it’s your job and you care about it, you’re going to do it without me hounding you.”

Jessica Emin
Kismet’s back of house (L-R): Lance Hu, Shayne Carnell, Jarrett Gorveatt, Ellen Baldwin, Annie Brace-Lavoie, Richard McNeil, Alex Scanlan.
In her no person is above another, and everyone has something to learn from their peer. There’s no room for bullying, yelling, intimidation, sexism or boastfulness. She doesn’t want to be called Chef. “I don’t want anyone to not want to come to work, like dreading going to school, that’s the last thing I want this place to be.”

Owners or leadership should be mitigating bad workplace behaviour or “old school boys club bullshit,” says Brace-Lavoie. She’s quick to add, “it doesn’t mean it’s just boys who’re instilling that. Even if you’re not the source of negativity, you have to be aware, if it’s happening under your nose you’re just as much to blame.”

“It makes me so happy that people walk in here every day already in a good mood. If you make your place inclusive and kind they’re already going to want to be there.”

With a coffee on the shelf next to her, soul music playing, Brace-Lavoie moves with ease as she rolls out fluffy white snakes of dough destined to be cut into tiny pieces of gnocchi. She’s happy in the place she and Cormier have made for themselves, and when that starts to slip reminds herself to “take a step back and ask yourself why you do it.”

“I love being surrounded by food, and other people that love food,” says Brace-Lavoie. “I don’t know that there is any bigger joy in life than eating. Being able to go to come to a place every day whose entire purpose revolves around creating, feeding and hosting people is just a total dream. We get to make memories and moments for people through food and drink, and I think that’s pretty darn neat.”