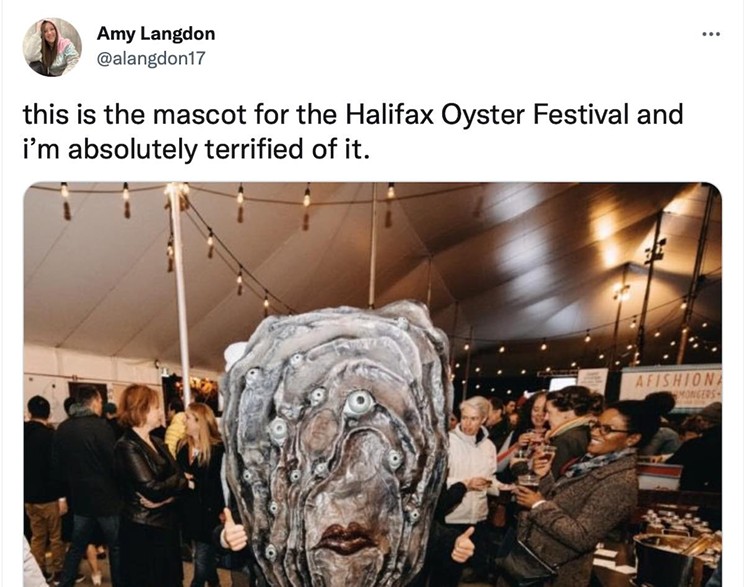 Screenshot
The tweet that launched a thousand quips: “This is the mascot for the Halifax Oyster Festival and I’m absolutely terrified of it.”

We were pumped to finally see Twitter catch the fire that is Pearl, our Halifax Oyster Festival mascot. On Sunday, local Amy Langdon, @alandon17, tweeted “This is the mascot for the Halifax Oyster Festival and I’m absolutely terrified of it.” And as of the time we scheduled this post, that statement was liked more than 200,000 times. People in Barcelona, New York, Vancouver, Dartmouth weighed in with opinions on Pearl’s briny appearance—monster or sexy oyster from the deep?

"My first thought was just, Wow, that's scary," Langdon told BuzzFeed News when it picked up the story on Monday. By then, we’d invited Langdon to this year’s festival, happening September 23 and 24 on the Halifax waterfront, so she was able to tell BuzzFeed how much she’s looking forward to being at Canada’s largest raw bar with Pearl. “I actually don't like seafood at all, but I will be going because I absolutely have to meet her."

When The Coast started Oysterfest six years ago, we wanted an anthropomorphized oyster to give the festival a feel, a look—a little bit creepy, a little bit sexy, as we told our talented colleague Aziza Asat. She came back a few hours later with a drawing of Pearl, just perfectly formed, and we were smitten. A few years later we asked local artist Helah Cooper if she could make us a costume with not much guidance, and she delivered Pearl *and* Earl (“THERE IS ANOTHER” as Langdon put it) made from paper mache, glue and a lot of paint.

Here are some of the best responses inspired by Langdon, Pearl and the Halifax attitude that sometimes you just have to say shuck it.

As a kid in Georgia back in 85 I was obsessed with growing up and moving to Halifax for no reason whatsoever. I literally knew nothing of the place. This post convinced me that I was wrong to not follow that dream

Before I’m an American, I’m a mascot for the Halifax oyster festival stan. https://t.co/sSAed6SQsz

This is the mascot for the Halifax Oyster festival. It looks like it fought Kamen Rider. Or Godzilla. Having grandparents from both Nova Scotia and Tokyo, I feel seen. https://t.co/iAQYXritzZ

Setting off all my phobias so THANKS HALIFAX OYSTER FESTIVAL https://t.co/Ifpa0IYKgz

I just got excited that we have an oyster festival but this is fully Halifax Canada not West Yorkshire https://t.co/wUdlsuaXOw

I remember turning on Canadian ESPN like 20 years ago, and they said the phrase "All eyes on Halifax today!"

Turns out it was all eyes on the Halifax Oyster Festival mascot.

Tim Burton seeing the Halifax Oyster Festival Mascot and wondering who her agent is pic.twitter.com/rbkpT3P8En

My therapist: The mascot for the Halifax Oyster Festival can’t hurt you.

The mascot for the Halifax Oyster Festival: https://t.co/kgenMQS2qs

Im so proud of my province

In Canada kids brush their teeth at night or else they may be visited by the mascot for the Halifax Oyster Festival.

Never are the differences between Western and Japanese design sensibilities clearer than when comparing oyster mascots. Here's one from the Hiroshima Municipal Culture Festival for reference. https://t.co/T5yRjogb2c pic.twitter.com/Q39Wh6Y9xZ

Shit. So lucky. Down here (Oyster Bay, Long Island) we have an Oyster fest and the closest thing we have to a mascot is like three different Billy Joel cover bands.

Christine is the Publisher of The Coast. She was one of the founding members of the newspaper in 1993 and has spent her whole career publishing for a Halifax readership. Christine is responsible for the business strategy, community engagement and overall publication sustainability.
Read More about Christine Oreskovich