The Halifax drag queens on a path to world domination share their top makeup tips. 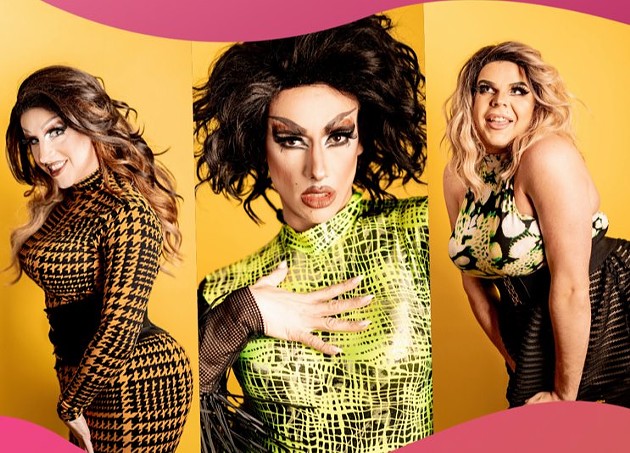 Daniel Dominic
The drag queens in Haus of Rivers are selling out shows despite the city's venue crisis and the global pandemic.

High-energy dancing, planned choreography, stunts and on point lip syncing are just a few things you can expect when you go to a Haus of Rivers drag show.


Drag queen trio Trinity Foxx (Dale Lemieux), Racheal Slurr (Dylan Phillips) and Brooke Rivers (Kevin Lemieux) have been doing drag since 2014—and aren't about to let COVID-19 suck the life from the local drag scene. “It’s a creative outlet but it’s so much more than that. It’s giving back to my community,” says dancing queen and originator of Haus of Rivers, Brooke Rivers.

“Sometimes people come to our shows and they're going through some shit and coming to our show brightens up their day, their week. That means a lot to me,” she says.


When, in February, a brunch event The Carleton asked Haus of Rivers to create was cancelled due to COVID-19, it could have been a spanner in the works—a crack in their stilettos' heels as the trio climbed upwards to stardom.

Instead, the group created a COVID-19 adapted show—and has been selling out gigs at the Argyle Street live music spot since mid-July.


Says self described sexy and provocative drag queen Racheal Slurr: “I just want to keep performing. So anything we have to do, we’re willing to do it right now.”


Haus of Rivers originally made its mark on Fredericton's drag scene six years ago before gaining popularity as it performed around the Maritimes. The group's hard work paid off when it was recognized in 2018 as being New Brunswick’s only official drag group—and was featured in a documentary called Late to the Party, which chronicled their struggles being small time performers with big time dreams.


Since settling in Halifax in 2018, Haus of Rivers has done dozens of shows and even been part of performances with well-known drag queens like Manilla Luzon and Alyssa Edward of RuPaul’s Drag Race fame.


And although the Haus of Rivers queens are used to filling seats, they say the Carleton was still a rare opportunity: “The lack of bars and places that actually support drag is the issue,” says pop diva lipsync assassin Trinity Foxx.

“Here, we just lost our bar," Foxx continues, referencing how Menz & Mollyz closed down early on in the pandemic. "We don’t have places. So we lucked out with the Carleton.”


But with a reputation that precedes them, the queens are selling out their shows at the Halifax Carleton even amidst a pandemic.  (The trio's latest event, slated for August 20 at The Carleton, is already sold out—so better snag tix for its September 18 Carleton show ASAP.)


“We get to make friends with the rest of the community and support people and make sure they have a fun time,” says Foxx.

“If you’re afraid, if you're nervous, if you don't know what to expect—just come. Just try it,” says Slurr. “It’s not just for us. It’s for everyone.”


And if you’ve ever wondered how these ladies get so glamorous, here’s a step by step guide on drag makeup, courtesy of the Haus of Rivers:


1. The first step to getting drag-ready is to shower and shave, unless you’re a hairy queen—if so just do the shower part, because Brooke Rivers says “Nobody wants a stanky, stinky drag queen.”


2. The next step is to cover the brows, which can be tricky: “We do the good old glue stick cover-up because I like to have big boy brows during the day but something a little slimmer and feminine for shows,” says Rivers. This involves applying multiple layers of Elmer’s Glue Stick to the brow and brushing it, combing the brow hairs back until they become textureless. This creates a smooth canvas. After that, you apply powder and then heavy concealer. (Rivers says any full coverage drugstore brand will do.)

3. “From there, once everything’s glued down and powdered,  I’ll foundation everything, working with something pretty thick to cover up the man underneath,” Rivers explains.  Most drugstore full coverage foundations aren’t bad, but Rivers says right now she’s trying out a foundation stick by Makeup Revolution.

4. Next is cream highlight and contour, which Rivers says helps “change the structure of the face” by creating illusions like a smaller nose or slimmer cheeks. This step can be different for everyone and Rivers says she likes her contouring to be severe. Then, you powder down all that creamy product you just used.

5. Then, Rivers says she draws on her eyebrows‚ which can change depending on her mood or outfit. “Some people do eye shadow and then they do their eyebrows but I find if I don’t do the eyebrows first, I just go crazy with the eye shadow,” laughs Rivers.

6. Next comes the eye shadow and liner, where you can really let loose: “I’ll do whatever I’m feeling that night,” says Rivers. “Sometimes I’ll do a cut crease kind of thing or sometimes I’ll just do something really dark and smoky.” And when it comes to shadow, Rivers says you don’t have to always wear top of the line products. “We have a couple Morphe [brand] palettes which aren’t super expensive but they have really great colours,” she says, “but honestly, you can get a lot of things for super cheap. I’ll slap on any cheap mascara or any cheap liquid liner.”

7. At this point Rivers says she will re-apply contour and highlighter, this time with a shadow version opposed to a cream to really darken those lines to make them seen. Then she’ll add blush.


8. Last comes lips and lashes: “I’m not a fan of anything glossy,” says Rivers. (After all, glossy lipsticks can fade quickly, especially when you’re dancing and sweating up a storm during a show.) Rivers, much like many drag queens, overlines her lips and stacks her lashes (meaning she wears more than one set of false lashes at a time), but says you don’t have to: “My drag is big everything and it would definitely be the same for Racheal, but Trinity has sort of a petite eye (look).”

Rivers says some queens prefer to look “fishy” (meaning more like female impersonators) whereas Rivers herself likes to do what she calls “draggy drag.”  But, whether you’re doing a toned down look or a dramatic look, blending eyeshadows and overdrawing lips can be tricky and take time. Professional Drag Queen Brooke Rivers says it can take her nearly an hour and a half herself.

Remember: Drag makeup is an art and practice makes perfect.