The Grass Are Done

last show april 1 at the sea-ho' 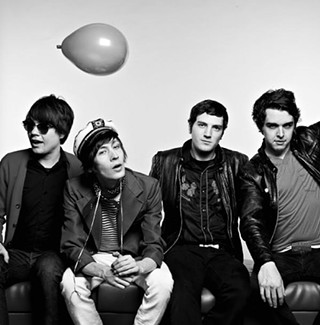 After many years and several different incarnations, The Grass are calling it a day. Guitarist Ryan Stanley is moving to Newfoundland for school, and as a result, the Halifax rock band are ending this streak. Their last show is happening Friday April 1 at the Seahorse. They'll be joined by Raccoon Bandit. There's also a digital EP on the horizon called The Grass Play 7 Hits! Of the MC5 - which, as you might guess, features a killer assemblage of covers.

And as happens so often around this place, everything old becomes new again. In the Grass's case, the remaining three members Willis Ryan, Dylan Ryan and Daniel Baldwin will be forming a new band called Money. The press release announcement says this music hearkens back to the Ryan brothers' "scrappy proto-punk" days.
I remember the first time I saw the Grass in Hell - there was, like, eight of them and they sounded a lot like the Band. It's been interesting watching their evolution into a quartet of leather-jacket clad ruffians. They've whittled down the membership while keeping their momentum up over the past few years, and I look forward to seeing what they'll do next.

Here's a video of the band doing their Detroit thang from last Halloween. Video courtesy of Noisography.com.