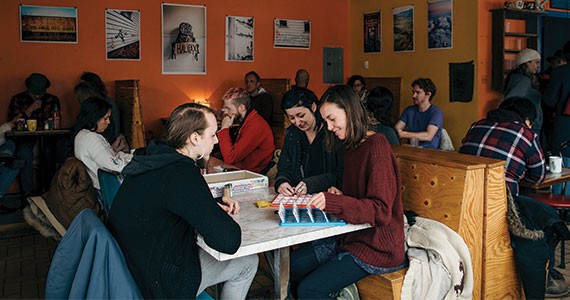 NXN Photography
“We don’t have many boundaries—the restaurant includes everyone.”
The Good Food Emporium closes its doors Friday after “eight years, nine months and 10 days” as a gathering place and restaurant. The space is being passed on to Sam and Tony Rinaldo—who have been sharing a kitchen with the Good Food for the past five months while cooking for their mobile businesses T-Dogs and Rinaldo’s Italian American Specialties—as a bricks-and-mortar location for their Italian restaurant.

“It was important for me personally to find somebody to fill this space,” says LeBlanc. “Not just by someone looking for a location for a restaurant, but by someone who would cater to the community that supported us for all this time.”
LeBlanc speaks excitedly about the signing over of the lease, recalling when Bob Trenaman of Bob and Lori’s Food Emporium passed the original Gottingen Street location and his recipes over to the the current owners.

Since moving to the corner of Windsor and Duncan Streets six years ago, the restaurant has continued to grow into a community landmark. Every weekend the space is packed with students, neighbours and even some diehard customers who still call it Bob and Lori’s.
Gunnells and LeBlanc go back and forth trying to capture what specifically makes the Good Food special to so many people, mentioning everything from the proximity of the tables to the bright colours on the wall.

“It’s the people that dictate what this place is,” says Gunnells. “I think it’s really hard to conjure up an atmosphere. People try to do it, but when you just let stuff happen, stuff happens.”
The restaurant follows an unusual business model, often giving away food to those who need it and trying to keep prices as low as possible so as not to push any of the community out.
“If you let weirdos and freaks come into your restaurant and you give coffee or food away to whoever needs it, that opens up the boundaries,” says Gunnells. “We don’t have many boundaries—the restaurant includes everyone.”

There have been a few times, LeBlanc says, they’ve asked people to leave because it’s been important to preserve the restaurant as safe space. She says a customer recently admitted that the Good Food is where he goes when he feels down because he usually gets “a bunch of hugs.”
Neither Gunnells or LeBlanc know what’s next for the restaurant’s three owners and seven employees, but they say there’s a nervous excitement for “new beginnings.” Some staff members have worked at the restaurant for up to five years, but LeBlanc says breaking the news of the closure was easier because they were open and honest throughout the decision making process.
Along with passing their famous struan bread recipe on to the Rinaldo brothers, the restaurant will be remembered in a cookbook full of recipes and stories later this year.

“If these walls could talk,” says LeBlanc. “From people getting together, to break-ups, to babies.”