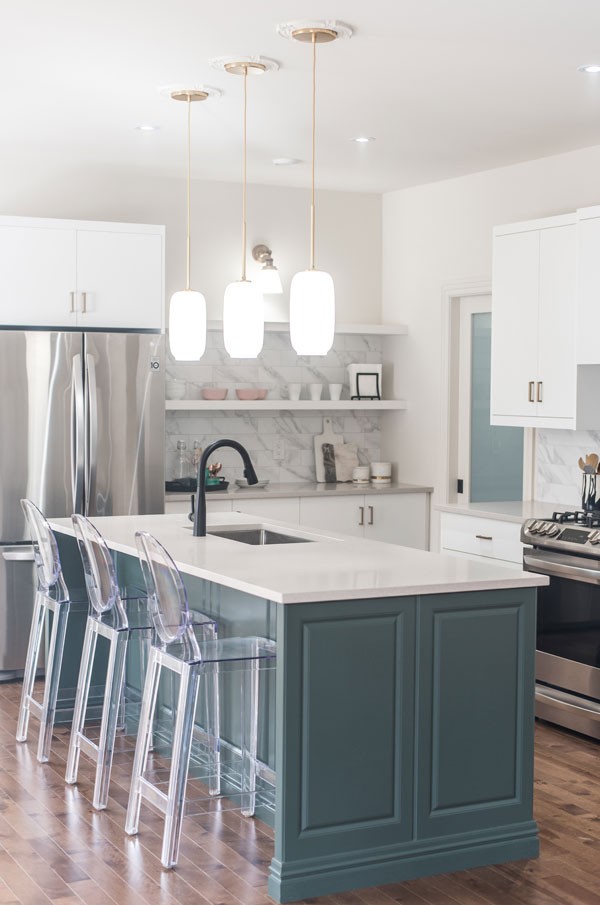 Matt McMullen
The clear stools are a visual distraction from the majorly detailed, hardware-heavy island

Robyn Manning is always thinking big picture. With a background in fine art, textiles and furniture, the principal designer behind Bricks & Birches—a design and consultation firm she founded in 2016—has her mind on sightlines, proportions and connections. It's all about the collective concept, not just beautiful bits and pieces.

Her latest feat of design strength? A model home in Timberlea's Brunello Estates. A creative collaboration with Bowers Construction's Suzanne Bowers, a house with no cookie cutter buyer in mind allowed Manning to test some limits and transcend a single aesthetic.

"We wanted to take these recognizable architectural details and evolve them in a way that would appeal to a modern audience," she says of the job. "We started looking at different Parisian apartments and really wanted to create this feeling of modern chicness, but traditionally rooted. I was envisioning some really chic French girl. How would she want to live in this neighbourhood?"

The result is a space where a chalky palate of soft blushes, greens and nudes work together with dramatic black anchor details, where the walls are cloaked in a cream instead of a classic white and where a pop of the unexpected ties it all together. "We tried to put ourselves in the perspective of whoever this elusive homeowner is," says Manning.

Here, she outlines how she made some of the design decisions that carried her creative vision through the entire home: 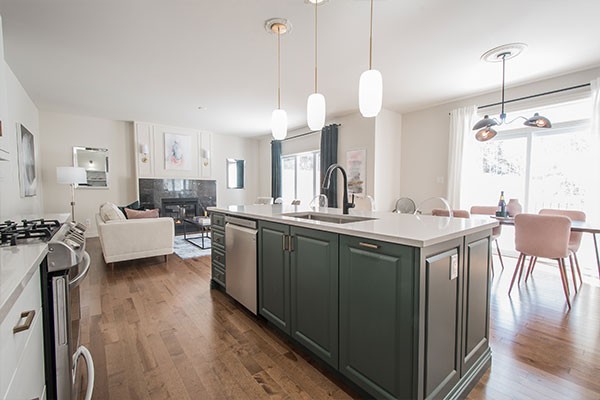 Matt McMullen
Bowers wanted art deco influence to shine through in the lighting. Manning says these milk glass fixtures “were the first lights we bought for the whole house.”

“It’s just a layer, it’s not necessarily a statement,” says Manning of the green island that had naysayers scratching their heads at first. “If you walk through and experience the house and see how it all comes together, you realize that it’s not just a green island.” She calls it her touch of the unexpected that feels at home with white perimeter cabinets, traditional ceiling medallions and is gently pulled into the living room’s colour scheme thanks to green drapes.

ALEXA CUDE
“We went really neutral with the furniture because we wanted to let the fireplace sing,” says Manning of the room’s focal point. “We wanted to bring pops of black in because there are touches of it throughout the house.” Self-professed as obsessed with stone and marble, she planned the room around the drama of its star. The classic material of the heavy fireplace is paired with traditional mouldings and wall sconces, which pop on the cream walls. “We had to say to ourselves, what’s the new neutral? 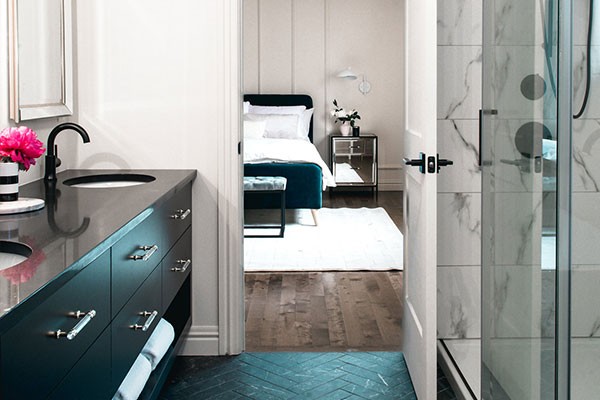 ALEXA CUDE
“It’s really, really chic and the sightline when you’re standing in the bathroom looking out to the bedroom and seeing those mouldings—it totally works somehow.”

“When you’re in it it just feels like you’re in a French boutique hotel. It’s so dynamic and peaceful all at one time,” says Manning of the dreamy master bathroom, where the millwork is the star of the show. The room’s architecture works as a work of art, which is why its sexy simplicity doesn’t need much in the way of decor bells and whistles. And it looks over an ensuite bathroom enveloped in matte black fixtures, herringbone floors and subtly colour-kissed marble shower.