The Coast
Joyce Liu is the head planner behind Off The Eaten Path, which is putting on the Halifax Asian Food Festival for its debut event.

Joyce Liu started Off The Eaten Path—putting on events revolving around tasty dishes—because food is a worldwide common language.

When Joyce Liu was starting to think about putting together a new food event, she knew she wanted to create something that would bridge the gap between different cultures. She’s the head planner behind Off The Eaten Path, a multicultural food festival showcasing Nova Scotia’s diverse and growing population. For its debut event, Off The Eaten Path is putting on the Halifax Asian Food Festival, running this weekend—October 29 to 31—with various Asian restaurants in the city creating special dishes that’ll show off cultures from nearly every corner of Asia.

“With food being the common thread, I wanted to go beyond what people see on their plate,” says Liu, who studied urban planning and founded media production company Lumi Studios. “With this festival working with all the participating businesses, we go much deeper into, ‘What is the food they’re cooking, where is it from and what’s the history behind it?’

“I just want people to love us like they love our food”: Five Haligonians share their experiences with anti-Asian racism in our city.

Even though this is Off The Eaten Path’s first year, more than 20 local businesses and restaurants have signed up to offer a range of delightful dishes over the weekend. Some of those include sweet desserts such as Sugar Bakery’s four-piece Chinese cake set, deep-fried chicken sticks from Backoos Korean Food and a new twist on traditional noodles from Star Anise Vietnamese Noodles. 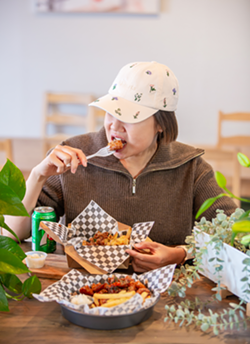 Lumi Studios
Bedford Highway’s Chicking is offering bite-sized pieces of Korean-style deep-fried chicken tossed in sweet and spicy sauce with a side of fries.

While the original plan was to hold a carnival-style event on the final day of the festival on October 31, heavy rains forced another agenda. Now, the carnival-style event has been postponed until November 6, where several of the participating businesses will set up shop at Halifax’s waterfront near The Salt Yard. From 11am to 6pm, a handful of vendors including Hi Tea, Ready For Joy and Chatime will be offering some popular Asian drinks, street food and locally-made crafts.

The idea of the festival sparked in Liu’s head earlier this year when she stumbled upon the basement food court in Spring Garden Place. Despite living downtown, Liu hadn’t realized a food court full of immigrant-owned restaurants was tucked away just steps from her home. It’s an issue she says many people have probably experienced during the pandemic due to lockdowns and gathering limits.

“People do not get a chance to go outside their door to explore their community to see what’s new,” she says. “People have been living online on Zoom on their delivery apps, and that creates an issue because last year, we had the most immigrant population increase in Nova Scotia.”

In 2020, Nova Scotia approved 3,517 newcomer applications—exceeding its federal allocation amount by 225 people and setting a new record. Liu says many newcomers start their own businesses, but find it difficult to engage in their new communities and share what they’re offering. With Off The Eaten Path, Liu hopes to ease that transition.

She especially wanted to focus on centering Asian culture due to the recent rise in anti-Asian hate crimes. An Angus Reid Institute survey released in June shows that 58 percent of Asian Canadians have experienced incidents of discrimination in the past 12 months.

If this year’s Off The Eaten Path is a success, Liu hopes to include more businesses and cultures in future festivals. She realizes there are foods from many Asian cultures that are missing from this weekend’s festival due to the difficulties of planning an entirely new event.

How we eat our food is just as important as the food itself: The way white folks eat is not the standard.

But local restaurants and the foodies who support their dishes will have another opportunity to celebrate Asian cuisine and culture next year. In May 2022 during Asian Heritage Month, Liu is planning a second Halifax Asian Food Festival that will be one week long; it’ll feature all the participating restaurants from this year and, hopefully, several other businesses. She’s also planning more food festivals that’ll feature cultures from other continents and include more of Halifax’s immigrant community.

“I’m a huge foodie, I love food,” she says. “I always think if food is the common language, it doesn’t really matter if you speak English or not; you smell good food and you’ll get attracted to interesting food.”

Night time is the right time at Ko-Doraku