The Fiddler on the Roof plays on

A remount of the Tony-winning classic helps preserve culture and foster community. 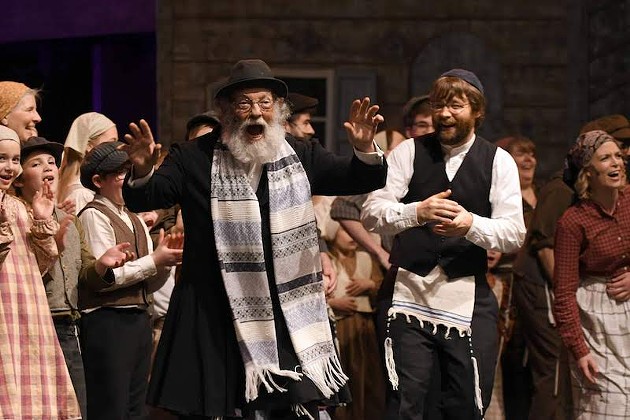 Peter Oleskevich photo
Fiddler on the Roof is one of the most ambitious musicals out there, but St. Joseph’s Stage Prophets Theatre Company isn't letting that stand in the way.

Last May, the St. Joseph’s Stage Prophets Theatre Company’s production of Fiddler on the Roof sold out all six of its shows.

The community theatre company has been around for 18 seasons, choosing one production each year—and Fiddler might just be their most ambitious project to date.

With a cast of over 90–not to mention a pit band, designers and crew members–Fiddler is a massive undertaking for any theatre company, professional or otherwise.

“It’s about as good as you can get for community theatre,” says Brown. “And the production quality would rival most professional theatre.” This is Brown’s first show with the company.

The musical tells the story of Tevye and his family as they fight to protect their Jewish culture and traditions in early 20th century Russia.

Rabbi Yakov Kerzner of Beth Irsael Synagogue in Halifax attended the Wolfville production in May, and plans were started for a remount.

“Watching Fiddler deepened my appreciation of my own grandparents' early life and what shaped their personalities,” says Kerzner. “Our community is lucky to have such talented actors dedicated to exploring and celebrating the many different cultures that have settled in Nova Scotia. Productions such as this one will only strengthen the bonds among the diverse populations that have settled this region.”

Remounting such a large-scale production is no small feat, and the company has been in rehearsal for the past six weeks in preparation for the upcoming show at the Spatz theatre. Despite the hard work and grueling hours, it is a labour of love for those involved.

“The events in this show happened not even a generation ago,” says Brown. “Whether you’re Jewish, Muslim, christian, atheist, it’s important to understand other people’s experiences, and understanding that suffering is universal makes us closer.”