The federal election is over; time to get to work

"We need all political representatives to cast aside their differences and work together to solve this challenge." 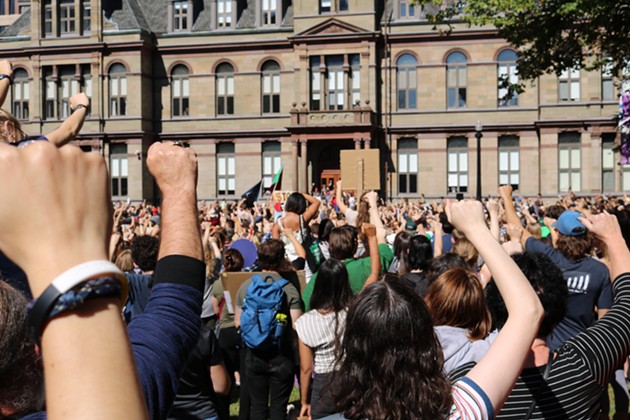 Isabel Buckmaster
Climate strikers demanding action outside of Halifax City Hall
The election may be over, but there’s no time to be complacent. Canadians voters—and many people too young to vote—demanded that politicians take climate disruption seriously. The parties and candidates listened and, for the first time, climate became a top election issue. Now we have to make sure they all come together to keep their promises and step up their ambitions.

We must hold elected representatives from every party to account, to avoid the usual scenario where parties and leaders concentrate on what will benefit them most before the next election rather than making serious attempts to curtail a problem that spells catastrophe over a longer period if we don’t act quickly and decisively. It’s an inherent weakness in our political systems. Many politicians just want to be seen to be doing something, as long as it doesn’t hurt their re-election chances, rather than demonstrating their commitments in ways that might not show immediate returns.

We don’t have time for political posturing or ego-fuelled divisions. Scientists have warned we have little more than a decade, if that, to bring emissions down to a point where they don’t keep the planet heating for years to come.

Although every major party campaigned with a climate plan, none went far enough. Even if the new government were to adopt the best ideas from other parties, the flaws in our economic and political systems could prevent us from bringing about necessary change. One flaw is the aforementioned election-cycle stasis. In part, that’s what keeps politicians and governments holding onto the status quo, fearing the bold, transformative policies the country and world so desperately need in this time of climate crisis.

Although every day we fail to take decisive action makes it that much harder to address global heating, the benefits of doing so still far exceed keeping the planet livable for humans and other species—although that alone should be enough. Some have argued bizarrely that protecting the very things that keep us alive and healthy is not economically viable. They elevate a recent, human-constructed system created under considerably different conditions than today’s above the natural systems that provide all we need to live, from air to water to food.

That in itself shows our economic systems are failing us and should be altered to fit today’s reality. But even under current economics, doing all we can to slow and halt catastrophic heating will pay many dividends. A recent study in Science by an international group of scientists concludes, “Over the next few decades, acting to reduce climate change is expected to cost much less than the damage otherwise inflicted by climate change on people, infrastructure and ecosystems.”

A report released around the same time by the Global Commission on Adaptation, representing leaders in business, science and politics, echoes that. It focuses on adaptation to the now-unavoidable consequences of climate disruption but doesn’t dismiss the need to prevent the crisis from worsening.

“Adaptation is not an alternative to a redoubled effort to stop climate change, but an essential complement to it. Failing to lead and act on adaptation will result in a huge economic and human toll, causing widespread increases in poverty and severely undermining long-term global economic prospects,” according to “Adapt Now: A Global Call for Leadership on Climate Resilience.”

The Science study notes we have little time to spare. “The investment is even more compelling given the wealth of evidence that the impacts of climate change are happening faster and more extensively than projected, even just a few years ago.”

We need to do everything to slow and eventually halt the climate crisis and to adapt to the consequences our stalling has already set in motion. The voters of today have spoken, and those who will soon be old enough to vote couldn’t be clearer: We need all political representatives to cast aside their differences and work together to solve this challenge. An election is just the start.