Sweet and spicy, this ain't the Colonel's KFC.

Between winter weather and the pandemic, the world can feel pretty small right now. That’s why we started The Dish, a weekly look at a single menu item from a Halifax restaurant. Whether it inspires you to dine in or take out, we hope to expand your eating horizons.

submitted
The best KFC in town isn’t from a Colonel, but a hole-in-the-wall serving Korean chicken.

Finger-lickin’ good had its heyday, but if you haven’t tried the KFC–that’s Korean fried chicken–at Backoos, you’re missing out on one of the best to-go meals in town. Served with rice and a couple dumplings, the chicken combo is reliable for any weekday lunch, quick dinner or late-night snack. We recommend the sweet spicy sauce option for the hearty portion of boneless fried chicken “bites” at the heart of this meal.

“Think about butter and chilli sauce together,” says Backoos co-owner Min Kim. “It tastes like comfort, but it has a kick to it.” Kim says it can be so spicy that you have to keep eating. “If you stop it, it’s going to hurt your tongue.”

Kim's surprised how much Nova Scotians enjoy spicy food, but there are still some who are nervous. “I always ask them, it’s going to hurt you, but make you happy at the same time,” he laughs. If you’re not into that, try the soy garlic sauce option. 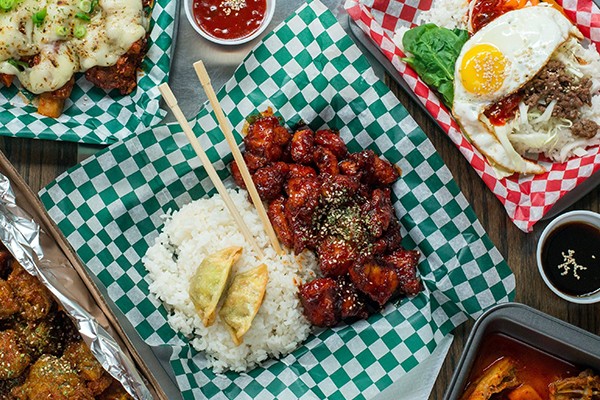 submitted
Sweet and spicy or honey garlic, both will have you wishing there was more.

Backoos first opened in 2015 at 1358 Birmingham Street. Since then, owners Sangho Back (the Back in Backoos) and Kim have opened two more locations, one at 73 Tacoma Drive in Dartmouth and one in Fairview 56 Supreme Court.

The restaurant switched to take-out-only at the beginning of the pandemic, and while dine-in is back for now, take-out is still about 80 percent of Backoos’ business, compared to 50 percent before. And business is good. Backoos had plans to open one more location—the fourth in the local chain—in 2021, but now that’s actually increased to two new restaurants.

“We were working on a fourth but then because pandemic we’re hesitating,” Kim says. “Because it’s hard to just maintain as it is. But then it turned out to be, it’s going our way.”

Backoos hours vary by location, but each is open daily for both take-out and eat-in.

While you can order Backoos on almost all the delivery apps, the restaurant prefers when you order by calling directly. “We have to [use the apps], but that’s a lot of pain for us,” says Kim. “Because even though we got a lot of customers through them, they take a portion of our sales.”

We can use inspiration, too! If you've got a favourite treat to recommend for a future edition of The Dish, email The Coast or tell us about it in the comments.

The Dish: The many kebabs at 902 Restaurant

DISH OF THE MONTH:
The Smash Burger