The colour of justice 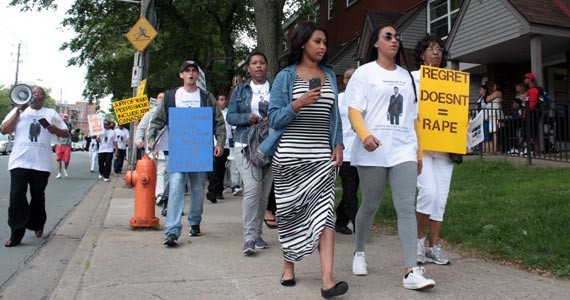 Hilary Beaumont
At the June 25 rally in support of Lyle Howe.

A multiracial crowd of about 75 people gathers outside the George Dixon Centre at noon on June 25. Men and women carry signs that read, "Justice for Lyle, justice for men," "Regret doesn't equal rape" and "Jury of whose peers?" The supporters of former lawyer Lyle Howe are here to express their dismay at his recent sexual assault conviction.

Howe's friends, family, neighbours and former clients are in attendance, and some of them speak over a megaphone. Michael Beals, a poet who once received legal advice from Howe, is here with his granddaughter. Like many of Howe's supporters, Beals believes race played a role in Howe's trial.

In the past month, the outcome of the African Nova Scotian man's trial has spurred a heated local debate about race, gender and the justice system. On May 31, a jury found Howe guilty of sexual assault, but cleared him on a charge of administering a noxious substance.

The complainant in the case testified she consumed alcohol and could not remember having sex with Howe after they began to kiss. The next day she had bruising on her chest; her vagina and anus hurt; and she felt dizzy and disoriented. Legally, consent requires a person to be continuously aware and willing, the judge explained to the jury. Howe told the court he believed their encounter was consensual.

Following the guilty verdict, the Nova Scotia Barristers' Society suspended Howe from practicing law. He'll be sentenced at the end of July.

Two days before the rally, Halifax's poet laureate El Jones meets me at Alteregos on Gottingen Street. She declines to comment on the particulars of Howe's case, but says the public reaction to the verdict should raise questions about race and the legal system.

"What we need to really be looking at is, why is the community in a position where they feel that they have been so marginalized by the justice system that [they believe] no justice took place?" she asks.

"...Whether we're speaking about Lyle, and those diverse opinions even within the community, I think what's absolutely inarguable is that there's a long history of racial discrimination in the justice system."

Over the megaphone, Beals leads the crowd in a chant of, "Free Lyle Howe! Free Lyle Howe!" Beals, who is African Nova Scotian, says Howe helped him when he was charged with intimidation and criminal harassment.

"Well first of all, I saw a legal aid lawyer, and of course the legal aid lawyer wanted to do a deal with the prosecution's office, but I wasn't into it because I was innocent of the charge." At the time, the poet had no job and no money. Howe gave him free legal advice. "Then I took the information and the advice that he gave me down to the court house and self-represented myself and I beat both the cases," he recalls.

Beals hopes the recent allegations of racism in the justice system are taken seriously. "Society does not look at black people as equals," he says.

The crowd marches downtown. Former Africville resident and current Uniacke Square tenant Phillip Daniel Izzard strikes up a conversation. "Cops target us, they prey on us," he explains as the march reaches the courts on Lower Water Street. "They pick up a lot of guys in our neighbourhood, for whatever reasons, guns, whatever, and half of the charges aren't even valid." Izzard is speaking generally, not about Howe's case specifically. "When we go to court, we figure we got no chance, and we end up pleading guilty to a lot of things that we're not even guilty of."

In his experience, lawyers frequently tell people of African descent they will likely be found guilty. "Then you plea bargain, right?"

"There are a lot of people in the group who have dealt with the law in a negative way," an African Nova Scotian woman who is an active member of the "Justice for Lyle Howe" Facebook group says of his supporters. She doesn't want to be named.

"It's very hard for a person who is not of African descent to understand the conditions that are around you when you're looked at for a crime, period," she says over the phone. "I do think race is something that goes along with you anytime you deal with the law."

According to a 2013 study by Canada's Office of the Correctional Investigator, inmates of African descent are one of the fastest-growing populations in federal prisons. "Black inmates now account for 9.3 percent of the total federal prison population (up from 6.1 percent in 2002/03) while representing just 2.9 percent of the Canadian population," the study states.

In the case of Rehtaeh Parsons, it took a massive public outcry and international embarrassment before two white men faced child pornography charges, Jones points out, and African Nova Scotians noticed. "The shadow of Rehtaeh Parsons is over this, and there are legitimate questions of why they can't convict on that rape, when they have photographic evidence, and the community is also seeing that.

"I think it's easier to convict a black man on this." Rape is epidemic in Halifax, so clearly Lyle Howe is not the only accused, convicted rapist, she says. "Why are we the only guilty ones? I think that's a reasonable question to ask. Whether or not we're guilty, justice should be proportionate and it should be fair."

And for people of African descent who face barriers accessing justice, she says: "As a system we need to look at what we need to do to reach this population and ensure they feel represented."