We're crowd-sourcing this document: Tell us what you find interesting.

Last year, the province signed a 10-year contract with IBM. The deal outsourced the province's SAP operation to the company. SAP is an acronym for Systemanalyse und Programmentwicklung, a German-created software system that companies, organizations and governments use for planning and managing finances. Before the deal with IBM, the province had an SAP division with 73 employees, most of whom have been given different government jobs, although a few accepted jobs with IBM.

IBM is using the SAP contract, providing at least $100 million in revenue to the company, as a core operation for supporting a new "global delivery centre" in Halifax, which will bid on other government and commercial SAP work. For establishing the global delivery centre, IBM will additionally receive up to $12.4 million in payroll rebates from the province, over and above the money received for the SAP work.

Still, while we know the general outline of the deal with IBM, the province refused to make the contract itself public. So, late last year, The Coast asked for the contract, and for ministerial briefing notes related to it, through Freedom of Information legislation. After considerable back-and-forth with the Department of Finance, we received a stack of documents this week.

Citing confidentiality, personal and financial exemptions written into the Freedom of Information law, the province has redacted many hundreds of pages in the documents.

The ministerial briefing notes, for example, are entirely redacted. This is becoming regular practice with the provincial ministers: They now routinely claim that they don't need to turn over the briefing notes at all. 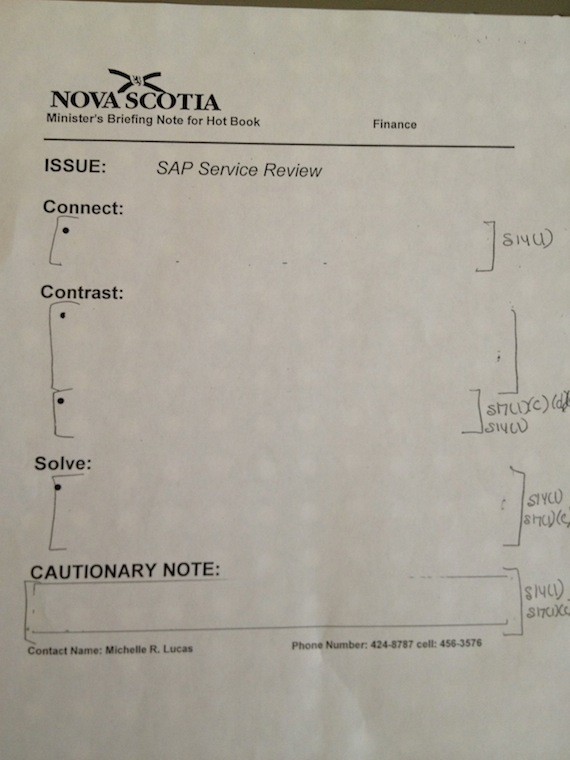 As well, nearly all the schedules to the main contract are completely withheld—hundreds and hundreds of pages, simply removed. And throughout the contract, there are hundreds of other, smaller redactions.

With our first cursory scan of the documents, it appears that if there had been any reference to where, precisely, IBM is to set up its operation, that information has been removed. The company has a temporary office in the RIM campus on Hammonds Plains Road, but it is understood that IBM will in the next few years move to downtown Halifax. We speculate that part of the deal between the province and IBM includes a requirement that the company rent at the Nova Centre complex, in the office tower above the new convention centre. If so, that requirement would serve as an additional provincial subsidy to Nova Centre developer Joe Ramia.

Despite the redactions, there are probably interesting things in the information we did receive. And here's where you, readers, come in. We'd like you to peruse the contract, and tell us if there's anything you find noteworthy, worrisome or worthwhile. You can leave your insight in the comments, or email news editor Tim Bousquet at timb@thecoast.ca.

You can find all the documents we received, here. This is a very large PDF (136MB) and will take several minutes to load.