It's "one step closer to owning our space," the theatre co-op says. 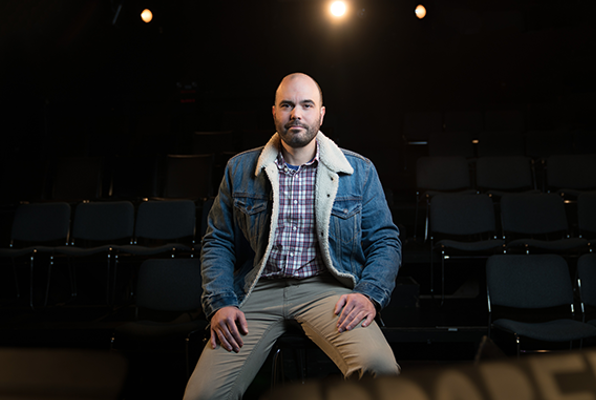 Artists, creators and their supporters poured through the doors. Purple light washed over dynamic art installations as music streamed from the speakers.

The scene could have been something from an exclusive function, but the warmth of the gathering told a different story: This was a celebration of community.

For the Bus Stop Theatre, the winner of the inaugural Creative Community Impact Award, there couldn’t have been a more fitting crowd to celebrate with.

Sébastien Labelle, executive director of the Bus Stop Theatre Co-operative, took to the stage with other members of the co-op to accept the $10,000 purse.

Labelle called on the crowd to raise their hands if they had performed, worked, visited, volunteered, or supported the theatre over the years. Almost 300 hands shot up.

“Look around you! It is you that makes the Bus Stop what it is and this award is for all of us!” Labelle beamed. “The Bus Stop Theatre has always been and continues to be a community effort, born of the community and for the community.”

“There’s also, of course, an obvious bitter-sweetness to this award as we receive it in the midst of a campaign to save our space,” he added. “It would be a true shame if this were to be a send-off award.”

Lara Lewis, vice-chair of the Bus Stop’s board, echoed the importance of this win for the theatre’s ongoing campaign to buy 2203 Gottingen Street.

“Hopefully it can help in continuing the momentum of support that we’ve been getting through the year and bring us one step closer to owning our space,” said Lewis.

Each year, the gala, hosted by Arts Nova Scotia and the Creative Nova Scotia Leadership Council, recognizes the achievements of Nova Scotia’s artistic community with “the province’s top arts and culture prizes”. This year, a diverse group of talented creators—including poet Arielle Twist and multi-disciplinary artist Raven Davis—took home a total of $95,000's worth of awards.

Plan your night moves with our Nocturne 2019 guide