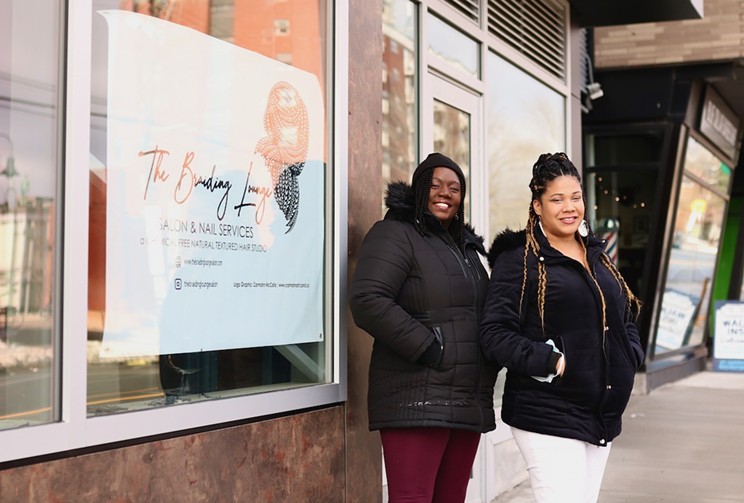 The Coast
Tara Taylor, left, and Braids by Tasha founder Natasha Stephenson outside The Braiding Lounge at 2300 Gottingen Street.

The north end hair studio will be the first Halifax salon dedicated to braiding hair.

There’s a colossal beauty connected to natural hair that Tara Taylor wants people to rediscover. It’s not that she has a grievance for treatments that change hair chemically, but rather a penchant for helping others feel unique and special in their own beauty. “Our hair really is our crowning glory,” says the Halifax stylist.

In early March, Taylor and her sister, Deidre Dorrington, are opening The Braiding Lounge at 2300 Gottingen Street. The hair studio is set to offer various natural hair services such as henna dye, extensions, microlocks, dreads, twists and locks, cornrows, silk presses and cuts.

Plans are in the works for Canada's only Black hair school to open in Halifax: Samantha Dixon Slawter's hopes Crown of Beauty Institute and Association can make for more inclusive hairdressing in the city.

My Black hair matters: Why you shouldn't be shy about the hair that grows from your scalp.

“The chemical services, there’s nothing against it; we still love our relax sisters and our colour sisters,” Taylor says. “But we want Black folk to get back to what God gave them and to celebrate the curls and the tresses that God gave them...but at the same time it’s still just a celebration—it’s just as beautiful.”

Hair has always been a passion for Taylor. Born and raised in East Preston, she started doing her own hair at 11 years old, taking over from her mother and quickly discovering a love for styling. Eventually, she started practicing on her cousins, aunts and even her own mother.

That passion led her to Halifax’s Hair Design Centre (back when it was on Dresden Row), where Taylor graduated in 1998. Sitting in the top five percent of her class, she won numerous international travel vouchers and hair design accolades, including an avant-garde award where she installed a working turntable into an updo. But after finishing her studies, Taylor’s goal was to own her own salon.

For the past three years, she’s been working at Dartmouth’s Crowning Glory Hair Studio Plus alongside owner Tracey Crowley. Taylor also joined the Cosmetology Association of Nova Scotia’s Natural Textured Hair Committee to help create a special license that recognizes natural braiders. “I was very, very happy at Crowning Glory, but I’ve always wanted a space of my own since I graduated,” she says. “Then, the opportunity came.”

In November 2018 when the $10 Viola Desmond banknote launched, Taylor had also been working with the North End Business Association on writing and directing a musical titled Viola. After that experience, NEBA executive director Tracy Jackson told Taylor that The VÉLO Apartments on Gottingen Street had a retail space that its developers wanted to dedicate to a Black-owned business.

“I think we did a really good job with the retailers that are there, they’re all young and entrepreneurial, but we didn’t see any Black business there,” developer Ross Cantwell says. “There’s no question, we’re right in the heart; there’s a lot of long-time Black residents in this neighbourhood.”

He adds that his team wanted to support a local entrepreneur who reflects the surrounding community instead of a retailer like a large restaurant chain. In fact, the developers are investing around $80,000 in constructing The Braiding Lounge, adding to the roughly $12,000 Taylor and her sister have already spent.

“We went the extra mile with Tara because we really believe in what she’s doing,” Cantwell says. “We think it’s going to reflect well on us and we think it’s the right thing to do.”

That sense of local community is something Taylor hopes to reinforce once The Braiding Lounge opens. The studio will stock several local beauty products, including Taylor’s line Carmalina Naturals and Tiffani Young’s Natural Butter Bar.

Moreover, Taylor plans to celebrate the north end community by hanging photos of The Braiding Lounge’s clientele, especially clients who live in the area, in the store’s window. She also wants to create a personalized lookbook with north end residents modelling the various hairstyles offered at the salon.

Taylor herself is deeply rooted in the community and draws a lot of her inspiration from Viola Desmond, who started Vi’s Studio of Beauty Culture in 1937 on Gottingen Street, right across the street from where Taylor’s setting up The Braiding Lounge.

“The theatre thing? Scratch all that. That’s a moment in time that, yes, that happened to her,” Taylor says. “But her legacy: she taught, she had her salon and plus she sold her products—and that’s everything that I am, that’s all that I do. She’s so inspirational.

“I definitely want to just honour her memory, and I don’t have to spew her name out all the time. But basically just honouring what she did because it was just so, so, so forward, ambitious and trailblazing.”

But for Taylor, what it comes down to is creating a sense of self-love for one’s own natural hair.

“All my kids are all natural; they’re in braids or twists or just leaving the locks hanging,” she says. “I just want them to know that they can do it if they want to just to be unique and change their hair. We do different things to our hair for style and for fashion, but knowing that they don’t have to do it to conform to anything that they are not.”