The best of Michael Caine

You’ll see him during summer 2010 in Harry Brown and Inception (with Leonardo DiCaprio and Halifax’s Ellen Page), but these DVD recommendations show Michael Caine has long been able.

Here's a question: What actor had his stage name used in a hit song by British pop act Madness? Here's a clue: He also appeared in the very first play by Harold Pinter. Got it yet? How about this: He's played a transvestite psychiatrist murderer and was in a killer-bee movie called The Swarm.

We're talking Michael Caine. Born Maurice Joseph Micklewhite in 1933, the British thespian with the very recognizable Cockney accent became a star in the late '60s, arriving when British cinema was looking for an everyman to fill leading roles. He went on to have a stellar career in Hollywood, although he was once known as the guy who would do any movie---see Jaws 4: The Revenge. Or, maybe don't.

You'll be able to spend some screen time with Caine this summer, with his vigilante thriller Harry Brown opening in cinemas now, and his supporting role in Inception coming in July. But if that just whets your appetite, here are a few of Caine's best roles.

A star is born
The two films that made Michael Caine an international star were The Ipcress File (1965) and Alfie (1966). In the former he plays Harry Palmer, the working-class spy of Len Deighton's novels. He's the anti-James Bond, crabby and insubordinate, wearing thick black-rimmed glasses that made him a '60s style icon. In Alfie, Caine played the fourth wall-breaking titular playa, a cad who begins to develop a conscience. Also worth seeking out from the period is the little-seen Gambit (1966), where Caine is a con-man in Hong Kong opposite Shirley MacLaine.

Criminal intent
Though Caine is featured in the original The Italian Job (1969), it's the three Mini Coopers driving through Turin that are the real stars. Get Carter (1971) is a thriller set in Newcastle, with Caine as gangster Jack Carter returning home to avenge the death of his brother. The film is a cult classic in North America, but in the UK it's held up as the quintessential British crime movie.

Caine has said his career-favourite movie is The Man Who Would Be King, (1975). Directed by John Huston, it stars Caine and Sean Connery as Peachy Carnehan and Daniel Dravot, two officers of the British Raj who trek into remote Kafiristan seeking a fortune and become kings of the people they find there. Then it all goes very badly.

The '80s comeback
After a number of less well-received movies, Caine made a comeback of sorts in the 1980s, playing a perpetually soused university professor in the charming Educating Rita (1983); the "Dudley Moore role" of a middle-aged, married man obsessed with a much younger woman (Michelle Johnson), a friend of his daughter (Demi Moore!) in Blame it on Rio (1984) and his Oscar-winning role in Woody Allen's Hannah and Her Sisters (1986).

In Neil Jordan's wonderful Mona Lisa (1986), Caine is at his most frightening playing a nasty pimp who employs Bob Hoskins' ex-con as a driver for one of his girls. In Dirty Rotten Scoundrels (1988), Caine goes toe-to-toe with Steve Martin as con artists working the French Riviera.

Recent history
Worth checking out is Blood & Wine (1996), a crime drama set in the Florida Keys, where Caine acts opposite Jack Nicholson and Jennifer Lopez, and The Quiet American (2002), an adaptation of a Graeme Greene story of a love triangle between a British journalist, a Vietnamese girl and an American agent in Saigon in the early 1950s.

Harry Brown is not showing in any theaters in the area. 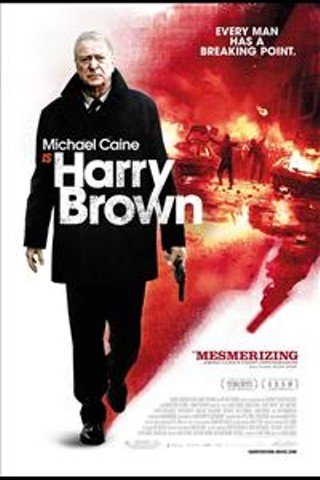