The beer doctor is in 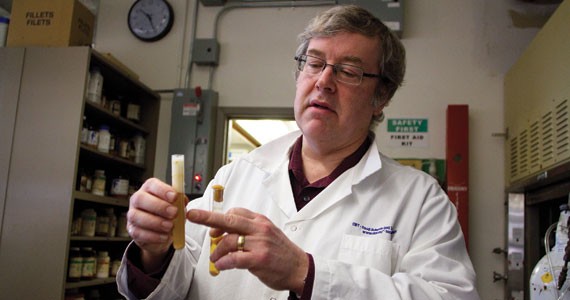 There are beer geeks, and there are beer nerds. And if he's going to be called one of them, Alex Speers insists on the latter.

I meet Alex Speers in person on the first mild day in March. Previously, on the phone, Speers had taken me through a PowerPoint presentation of complicated-looking graphs and used words like "lecithin" that forced me to dredge up whatever was left of my first-year biology studies. Today, I'm hoping to see some of his work in action.

But the first thing Speers shows me when we reach his office, tucked away behind a maze of graduate student cubicles in the Canadian Institute of Fisheries Technology at Dalhousie University, is a pair of beer bottles: "The first two bottles of Ryder in Canada, which I made myself," he says, pointing proudly at his bookshelf. "In fact I made all of those bottles on that shelf while working on the line." Growing up in Creston, BC, Speers lived a couple of blocks away from the Kokanee brewery. He spent summers working in the plant and learning a lot about a brewery. He wasn't great at driving a forklift or kegging ("It was pretty hard if you were left-handed in those days"), but when he saw a guy in a white lab coat walking around the brewery, Speers decided that was the job for him. "Especially since I didn't have the marks to get into med school," he says with a laugh.

Speers doesn't go to great lengths to hide that he's a fan of beer. That is to say, the science of beer. "This is going to sound cheesy," he says sheepishly, "but I am an advocate of the art and science of beer."

From those roots began an academic career focused on understanding the process of yeast flocculation (what Speers calls "molecular velcro"---essentially how yeast clumps together) and fermentation. "Things have changed since the '70s," says Speers, pointing to how brewers' equipment and understanding of the process has improved and they themselves are becoming better scientists---thanks in part to research like his. Speers doesn't get to work in the lab much these days, as most of his time is devoted to teaching and supervising graduate students."It's amazing how simple the actual lab work is," he reflects as he shows me the grain grinder. The process in the lab looks a lot like brewing on a microscale ---mashing is done in beer can-shaped tubes in a temperature-controlled water bath, and fermentation happens in 15-ml test tubes.

The research team's latest breakthrough has been identifying a fungus in brewer's malt that leads to premature yeast flocculation (when yeast drops out of the wort early, slowing down the fermentation process). They are now working with the Saskatchewan Department of Agriculture to identify malt barley strains resistant to the pathogen. It may sound like a somewhat obscure topic, but it's a problem that irks brewers from Budweiser to Propeller.

Back in the lab, Speers has just finished sketching out the physics formula for shearing (the process through which particles suspended in fluid clump together through agitation), forcing me to dredge up my first-year physics. "This'll never get into The Coast," he chuckles. So what is this beer nerd's favourite beer to drink? "I never met a beer I didn't like, but the best beer in the world is the one you like."