The beat of Mobius Percussion

This New York-based quartet is about to drum up a storm in Halifax. 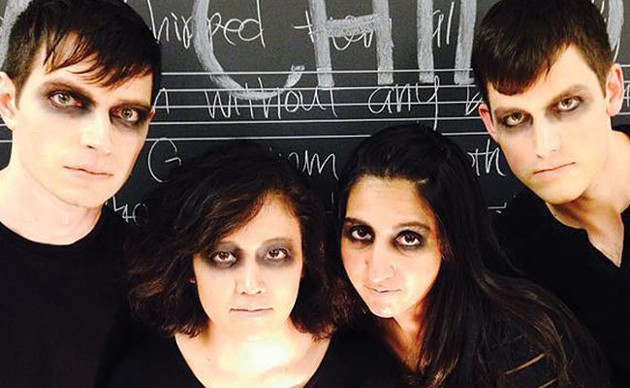 The Mobius Percussion group is often described as a chamber music quartet, but to hear them perform is to know they don't fit squarely into any box.

"We are all over the map," says member Mika Godbole.

The quartet, which hails from New York, is taking the stage twice over the course of this year's Scotia Festival, an annual two-week showcase of chamber musicians.

Founded in 2011, Mobius has gone through some personnel changes since then, and the group is currently made up of Godbole, Yumi Tamashiro, David Degge and Frank Tyl. Tyl won't be at Scotia Fest, so Detroiter Nicole Patrick is subbing in for him during the performances.

In addition to Thursday's concert, Mobius is teaming up with Mocean Dance—among other additional dancers—to present a collaborative piece titled There Might Be Others on Sunday.

"I don't know what the stage setup will look like at the Scotia Festival," says Godbole. In past performances of the same piece, though, "there's a big dance floor and off to stage left is like a garage sale of percussion instruments, and we're just weaving our way through all of them."

This week marks Mobius' first visit to Nova Scotia. There Might Be Others (composed by Dan Trueman) is made up of different sections, but the audience may not hear all of them. The number of modules that are played vary from performance to performance, since it's largely improvisational. One moment, someone might be playing the drum set. The next, they'll switch over to bass drum.

The musicians tend to play off the vibe of the dancers, directed and choreographed by the Halifax-born, New York-based Rebecca Lazier. On top of that, Godbole says the quartet will have several additional musicians joining them.

"I don't know what their strengths are and where they'll feel comfortable, but we're hoping that we can encourage that same sort of like, 'little travelling minstrel' sort of idea."

It's been more than a year since Mobius has brought this particular piece to the stage, so Godbole is excited to find out how it will feel to play it for an audience again.

"We all know the music and it's in there now, so I feel it's had time to marinate," says Godbole. "And now, as we teach it to other people, I'm looking forward to seeing what we can do with it and how we can pass it on."

100+ patios to simmer on this summer

By Morgan Mullin and Rebecca Dingwell