Jason Nickel is creating entertainment 2.0 in Halifax, and Hollywood is paying attention. 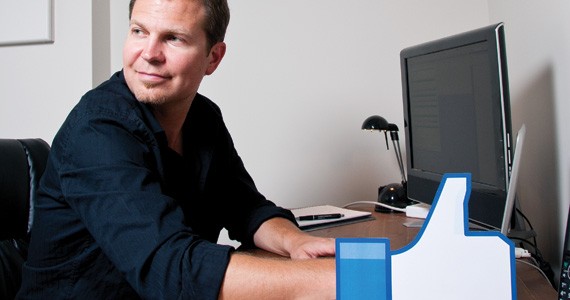 Aaron McKenzie Fraser
Watch out, kids. When you’ve got the viral touch, your hand goes big like Jason’s.

Imagine it's the not-too-distant future. You invite your friends over to watch a movie, log into Facebook, then press play. You proceed to watch a movie with you and your friends as the main characters. There's a Halifax techie bursting onto the scene who's working on an app for that.

Last October, Jason Nickel, a Flash developer from Chester, released a horror short called "Take This Lollipop." When more than 400,000 people tried to watch the video in the first 24 hours of its unadvertised release, its servers crashed. Over the coming months, the servers crashed regularly as the video racked up more than 100 million views.

"It made no sense," says Nickel. "We were in there with Ellen, the Today show and The Bold and the Beautiful. You never see a website up for an Emmy."

To watch the interactive video, simply go to takethislollipop.com and log into an online application with Facebook. The camera moves through a creepy rundown building until it finds itself---you find yourself---in a room, alone, with a creepy guy hunched over his computer. He's looking at Facebook. And then, on your computer, you watch this total stranger, on his computer, start to look at photos of you.

Nickel, who has a wife and five-year-old daughter, has been creating breakthrough websites from his home in Chester for the past five years. Most of his work and connections come from California, but he prefers the pace of Nova Scotia to that of the west coast. He believes that he can initiate some big ideas here, too.

"There is a chance that Halifax could build something right here, there's no reason why it couldn't," Nickel says. "It would just take some open-mindedness."

Halifax already has the web development and film industries that Nickel believes could support a sea-change in entertainment technology: interactive movies and TV shows. That's partly why he moved from Chester to Halifax last March, so that he could build a core team of developers to push that vision forward.

Nickel hired his first permanent employee, Colin Jackson, in May. While waiting to find an office space, Jackson and Nickel are doing some of their work out of Jackson's renovated garage in the west end.

Coffee stains, folded edges, personalization and interactivity are a few of the possible ways to create that real experience which turns simple, creative ideas into viral sensations. "Take This Lollipop" created a more real user experience than most digital entertainment because it implicated the viewer in the plot line. That experience generated 10 million Facebook likes in a month: the fastest growing Facebook Connect application yet.

"That's why 'Lollipop' was so amazing," says Jackson. "It was you, the consumer, the user who was in control of marketing the product, not us. It was the user who was actually saying 'Look at this, this is amazing. I just got the shit kicked out of me.'"

Nickel wants to make the leap from that two-minute experience into full-length television shows and movies that adapt themselves to fit their viewers. He believes he could be creating a feature-length film as an interactive application---perhaps even a sequel to "Take This Lollipop"---as soon as next year.

Nickel has been building flash promotions for the advertising industry since 2001. He has developed interactive and personalized promotions for clients like McDonalds, AT&T and Dr. Pepper. Then, last year, Nickel developed "Lollipop," funded completely by him and the video's director, Jason Zada. It was Nickel's first serious move from personalized advertisement towards personalized entertainment.

The main hurdle is getting personal information about the viewer to make the personalization work. "Lollipop" only works if you agree to give it access to your Facebook---a daunting gambit to make with a video that is designed to look creepy and forebodes the danger of sharing Facebook information. Nickel still has close friends who won't give the website access to their information, though he insists that he's not interested in it.

"I don't keep any of it," says Nickel. "I don't want any of that information. For 'Lollipop,' it was totally clean. That's the way it should be, because, as a viewer or an audience, you just want to go to a site and enjoy it, not know that you're getting information ripped out of you."

Nickel has argued with clients over this matter, trying to convince them not to store data or send out spam email to people who watch their promotions. For personalized entertainment to work, users have to trust the developers enough to hand over their information, and be aware of what information they're sharing. Then, it may reach a point where viewers hand over more.

"There's a new generation that's coming up, they put too much stuff on Facebook, and I think there's going to be a balance," says Nickel. "I think people are gonna learn to upload and post things that are meaningful to them, rather than just trash. And then, people might actually want to go and define themselves more, so that they get a better entertainment experience."

Nickel is passionate about the better user experience, but no matter how hard he tries, he can't make it the best, because the possibilities of technology and creativity are constantly advancing. He hopes that with his new team, he'll have a group of people who can keep ahead of those advances.

"It's easy to do these things in your basement and knock 'em out, but it's really hard to do them well. So, I think that's where we specialize, we're getting better at them."

Sam Littlefair-Wallace is an amateur freelancer and a member of that generation that puts way too much stuff on Facebook.