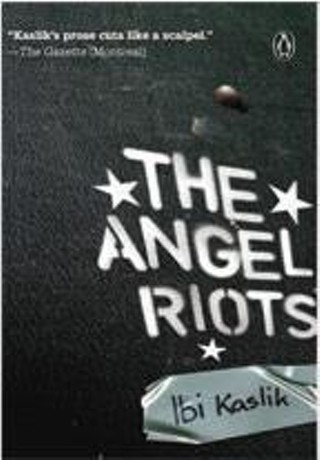 The Angel Riots
Ibi Kaslik
(Penguin)
Anyone who has an allergy to hipster fiction would be forgiven for tossing Ibi Kaslik’s book down after a reference to Pitchfork---music-wankery website supreme---appears on page 13. It doesn’t help when you read in the press notes that Broken Social Scene named a song, “Ibi Dreams of Pavement (A Better Day)” after her, or that Kaslik’s touring the book with Apostle of Hustle. But you’d be missing out on a sharp study of family power dynamics---biological or band---that still resonates after all the trashed rooms, cigarette butts and empty bottles are cleaned up. Prairie girl Jim, an 18-year-old violin prodigy, and Rize, a side-kick trombonist with a hefty drug problem, share narration duties as The Angel Riots, a growing and complicated collective of musicians embark on their first North American tour. Voted back home as Most Pretentious Local Act, the band becomes instant critics’ darlings. Unable to cope with pressure, Rize begins an awkward, hallucinogenic affair with Margo, wife of Jules, Riots’ front man and his best friend. Quietly dealing with the death of her twin brother, Jim retreats inward. No shocker---the band implodes---this is a tale as old as a shitty broken-down tour van, but this time, it’s told with lyrical confidence and moments of occasional beauty.
Sue Carter Flinn