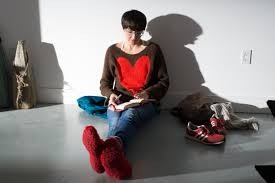 Mike Tompkins
Tanya Davis on the set of Heartbeat

The 34th Atlantic Film Festival announced this year’s Atlantic Gala and Atlantic Features program, to just tease you with a little film goodness before the August 20 full festival announcement. Andrea Dorfman’s Heartbeat, in its Atlantic Canadian premiere, will screen at Park Lane on Friday, September 12 as the Atlantic Canadian Gala (disclosure, I am in this film for a minute). Dorfman’s film continues her collaboration with poet and songwriter Tanya Davis (you may remember their smash hit collab How to be Alone), as Davis’ character follows her heart in a touching film (there’s animation too! And a really striking bit part character, wow who’s that girl?)

The Atlantic Features Program features Kent Martin’s documentary Raising Windhorse; Jesse Harley’s Lure and two features from Paul Kimball in The Cuckoo in the Clock and Roundabout; Tim Tracey’s Canadian Ninja and Nik Sexton’s How to be Deadly; Newfoundland's Christian Sparkes and Jordan Canning offer up Cast No Shadow and We Were Wolves, respectively; and Jean Beaudry's La gang des hors-la-loi (The Outlaw League) just wants to do bad things, OK?

TV production gets some shine with the Atlantic Broadcast Program featuring productions made for TV from New Brunswick The Boy Who Was Bullied, Code Kids and Les sceaux d’Utrecht, Prince Edward Island Rainbow Valley, Newfoundland Sister Morphine and Vocation and Nova Scotia Bounty: Into the Hurricane, Edge of East, Santa Quest & State of Mine.

A complete list of the Atlantic Canadian program with film selections, filmmakers and schedule of screenings, as well as tickets, can be found online at atlanticfilm.com.

The 10x10 Music Video Mentorship Program has once again matched up 10 music makers with 10 video makers for a peanut butter and chocolate style match made in heaven. Ten music videos will be shot over 5 days and a jury will decide which duo will win the $10 000 prize.