Skratch Bastid tells you what to dab his personal line of BBQ sauces all over—and what to listen to while you’re eating. 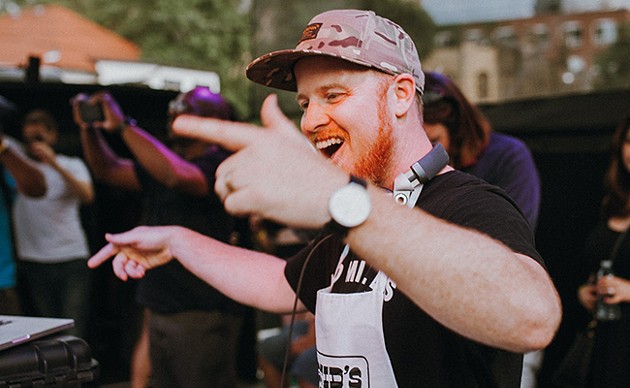 Submitted
Skratch Bastid plays host, chef and spinner at BBQs around the world.

The DJ Skratch Bastid began throwing parking-lot barbecues as a way to mix things up, way back. "It was an early-evening concept, where I would grill up burgers and dogs in the afternoon before the show at night," says Bastid, AKA Bedford's Paul Murphy, en route to a show in Toronto. "It never really took off or anything like that. It amounted to me cooking dogs for people waiting to get into the Marquee."

Seven years ago he started holding BBQs at Steamwhistle Brewery when he moved to Toronto, and it did take off. In addition to annual shows there and here (this year's is Saturday at Olympic Hall), he's thrown grill parties wth special guests in San Francisco, Ottawa, Calgary, Tokyo and Chile. "I always love a daytime party—it allows me to play different vibe stuff," he says. "I felt like I was missing the opportunity to play some sunny positive vibes."

Last year, Murphy introduced a line of barbecue seasonings (each is $7-$8 or all three are $19.99), developed via a DJ friend's family recipe. "You can't have barbecue without sauce," he says. "I never knew how many people really like sauce until I got in the sauce game."

Best applied to: Brisket. "It's a great one for meats. These sauces are hot, but they don't kill you. They're not hot sauces for the sport—they actually taste great. They're dabby hot sauces—one dash per bite."
Eat while bumping: "Skew it on the Bar-B," Outkast feat. Raekwon

Best applied to: Eggs. "It's a great little morning egg kicker. I got a text from my homie Shad who's like, 'I can't eat my eggs without your hot sauce anymore.'"
Eat while bumping: "Never Too Much," Luther Vandross

Mr. Bern's BBQ on the Run heats up on Barrington Street