Paying tribute to the city's quintessential gay bar as Halifax navigates Pride without it. 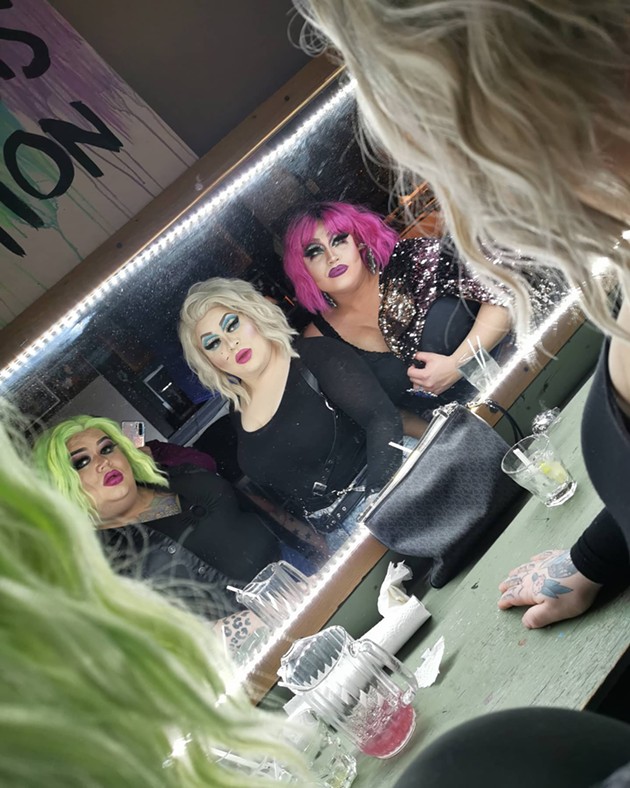 Facebook screenshot
Haus of Jeckyll is a trio of drag queens that regularly performed at Menz. "This was a second home and safe haven for not only us, but a lot of people in our community. Sending so much love and light to our amazing queer community in Halifax," wrote the performers in a Facebook post commemorating the bar.
We've lost a million things since mid-March, not the least of which is our collective sense of what normal life looks like. It's been a hard road, with sacrifices big and small, personal and communal. And while summer's here now—and while Pride's given us over 35 ways to celebrate the infinite shades of sex and gender— we want to take a moment to remember an early casualty of COVID-19: Menz & Mollyz bar.

The nucleus of Halifax's drag scene; one of the few remaining small venues where bands could get their feet wet with live performance; a key player in the house music scene; an anchor for the 2SLGBTQ+ community: The hole-in-the-wall entry at 2182 Gottingen Street belied the fact that what awaited inside was all this and more. In April, when Menz announced it would close for good, we realized COVID isn't the great equalizer—it hit the marginalized harder, like everything else does.

"Where will the king and queen of Pride get their crowns from now on?" we asked, before setting forth a space for you to share what made Menz such a special place for so many. Here, we share your anonymously submitted responses—all while dreaming of nights spent on a crowded dance floor:

Submitted
Andrew Morrissey as Hedwig in Hedwig and the Angry Inch, performed at Menz in July 2019.
"Last summer I went to see a show of Hedwig and the Angry Inch at Menz and have such a vivid memory of watching Hedwig (Andrew Morrissey) perform "Wig in a Box" and surprising myself by absolutely sobbing. It was so tender and vulnerable, and I felt so exposed, but so warm sitting watching. I had just had a very painful breakup a few weeks before and I felt like I 'turned back to myself' watching."
"I have only been there once: To see Hedwig and the Angry Inch last summer. What an honour to have the opportunity to see a groundbreaking performance in a legendary place."

"Gathering to watch RuPaul's Drag Race together. That always felt so intimate and special. We'd head into the karaoke room afterward for songs and dance."

Facebook screenshot
Watching RuPaul's Drag Race on the big screen together was the sort of familial vibe on offer at Menz.
"[I] started going here when I was 20, and it closed the year I turned 30. I am so happy to have had the memories (and lack of memories) there that I did and it helped shaped my twenties into what your twenties should be: Chaotic, regrettable, fun, emotional, miserable, and (looking back) enormously enjoyable. As someone who didn’t fully come to grips with their sexuality until I was 20-21, this place helped me explore both in ways that bars/clubs allow you to explore the wild adult nightlife, but also into the world of queerdom aside from typical cis white gay men (which I am).
I’ve lost IDs, cash, jackets, and short-term memory here more times than I’d care to admit, but it’s all a part of the learning curve of growing up. One brazen and uncharacteristic memory I have there is from my early twenties, in which I was dancing up a storm one night with a crew of my straight guy and girl friends, and catching eyes with another guy on the dance floor. One thing led to another and I guess I sort of...ended up...ripping his shirt in half while we aggressively made out on the dance floor. I was definitely in shock of myself. We tried to make a go of a normal sober date in days following the incident, but things didn’t pan out. If he’s out there reading this right now, my sincerest apologies about the shirt and I hope you are well! We will miss you Menz, and I’m sorry my last memory there will forever be an unpleasant one."

Instagram screenshot
A live shot of Toronto three-piece Absolutely Free, which played Menz as part of Obey Convention (now called EVERYSEEKER Festival).
"Seeing Absolutely Free play at Obey Convention."
"So many Halloweens and New Years Eves spent here. Always a blast. Thank you for everything you did to help my friend find herself and the new community she was meant to be a part of. You will be missed!"
"I'll never forget holding hands with my then-secret girlfriend and kissing in a room alone. I still had a boyfriend then but I never felt judged and only safe with my queers. I dumped him the next day."
"My band Good Dear Good had the pleasure of playing there for Pride in 2019.  Three of the four members of our band are part of the queer community so it was such a fun experience to be a part of the celebrations. After spending the day at the parade and surviving some pretty intense heat, we were able to go and have probably the funnest and care-free show we’ve played together as a band. The energy was great and stress-free. Definitely disappointed we aren’t able to play there again."

Facebook screenshot
Good Dear Good played at Menz as part of Pride 2019.
"I will never forget the energy that I felt in that room when I went to see my first drag show. A few dozen people created such an accepting and welcoming atmosphere that made me want to embrace my community even more."
"I started my bands playing shows at Menz: we started with Gottijams [the weekly free-jam incubator for new talent] and then moved on to playing weekend shows. I've played on every stage of that bar multiple times and had some of the best nights of my life there. We've played to packed rooms, we've played just to the sound guy (Gary, who is a goddamn saint and a Halifax treasure). If it wasn't for this place, we wouldn't have had the stepping stone that is crucial to move forward as a band. It's a huge loss for the LGBTQ+ community and the Halifax music community as a whole."