Ten ways to upgrade your weekend

Indie films, belly dancing and Asian art are just some of the things in store. 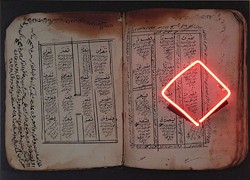 9. Live Music › Banjo Dan Walsh In Concert. Sunday, June 12, 2pm. Experience the music of UK Banjo sensation Dan Walsh at this intimate concert. Sitting around a coffee table together, guests at this home concert will truly get to know Walsh and his work, connecting through song in a relaxed setting. >>

7. Lecture › CaNOE Ocean Literacy Keynote. Thursday, June 9, 5-9:30pm. Tired of all the doom and gloom surrounding environmental discussions? This Ocean's Week event offers a ray of hope. Join speaker Dr. Elin Kelsey, educator, researcher and award-winning author, as she discusses what's new in ocean conservation—and all we have to be optimistic for. >>

6. Dance › April Rose. Friday, June 10, 8pm. See the slithering, sultry moves of world-famous belly dancer April Rose as she shares the stage with a fabulous selection of local dance stars. Shake your hips and get lost in the groove! >>

Alert the Medic
Catch Alert The Medic! as part of the lineup at Garrison's Backlot Bash! (See number 1).

4. Visual Arts › Disoriented: New Works from the Permanent Collection. Friday, June 10, 8pm. Showing until July 31. Marking the fifth anniversary of the Arab Spring, this opening shows a collection of recently-acquired permanent pieces centred on themes of Asian cultures and identity. Rejecting the West's long history of romanizing eastern cultures as the exotic orient, this exhibit allows the voices of diverse Asian and Middle Eastern artists to be heard. >>

3. Health & Wellness › Barefoot Ecstatic Dance. Saturday, June 11, 7:30-10pm. Get your zen on at this evening of moving meditation! The perfect way to add a dose of relaxation to your weekend, this event is all ages. Please refrain from wearing scents. >>