The Halifax-born ambient, improvised noise maker talks splurging on popcorn at the movies and why it'll always ride hard for NoFX. 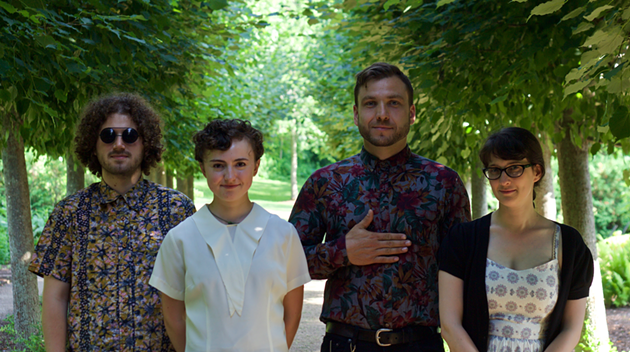 Submitted photo
Halifax-born band slash sound experiment New Hermitage is like a dreamy soundtrack to your fave sci-fi novel.
The four-piece ambient, improvised music group New Hermitage has been melting brains and building mazes of sound since 2017.  The basis of what unfolds before your ears and eyes onstage is a Ray Bradbury-sounding experiment, described in the band's press release as follows:

"New Hermitage imagines a future in which pollution has decimated the population of the Earth and dangerously high levels of toxicity have rendered the cities of the world uninhabitable. The surviving humans are forced to live in nomadic clans that wander the sparse wilderness, struggling to claim what little natural resources remain. However, a few solitary people have returned to the cities. With patience and tenderness, these new hermits balance technology with ancient wisdom to work with nature and restore the planet. The music of New Hermitage imagines the soundtrack to their survival, incorporating what these lone individuals might hear among the crumbling cities they call home."

It is, in short, music that's mind-altering, time-travelling and a hell of a trip.

As the band prepares to take your ears into the future on Friday, Nov 22 at an $15/PWYC, 8pm Radstorm show, we got the gang to fill out our questionnaire—which they say was completed in the tour van at some point between Chicoutimi, QC, and Ottawa, ON.

1. What was the first album you ever bought with your own money?

Ross Burns, guitar: NoFX's White Trash, Two Heebs and a Bean
Ellen Gibling, harp: Hanson's MMmbop? Is that what the album is called?
India Gailey, cello: I have trouble remembering. It might be American Idiot by Green Day. Maybe Goodstuff by the B52’s?
Andrew MacKelvie, woodwinds: Running with Scissors by Weird Al.

2. If you were to name your influences, which name on the list would be most surprising?

R: NoFX - White Trash, Two Heebs and a Bean. It’s a bit weird to answer that question.
I: How are you supposed to know the answer to the question? How do you know what influences you?
E: What did Ross write? That works for me.
A: The Great Muppet Caper sound track? Specifically “It’s a movie.”

3. What’s the best concert or live performance you’ve ever gone to?

E: Id M Theft Able at Thunder and Lightening [in Sackville, NB]as part of an OBEY Satellite show we played together.
R: I did go to a NoFX concert when I was 13, but you don’t need to say that.
I: The one that sticks out is the Grizzly Bear concert I saw in Montreal a few years ago. Id M Theft Able is up there too.
A: I saw David Mott (a baritone saxophonist) play at 1313 Hollis in 2008 and in the middle of his solo he walked out onto the street and kept playing.

4. What one thing/person outside of music has shaped the way you make music?

A: Growing up in the country and listening to the sounds of the world around me. House hold appliances.
I: Buddhism. Visual Art. (A: like paintings of bowls of fruit?)
R: Sport

[No one in the New Hermitage van knew how to attach a gif.]

6. Share the last shot on your camera roll below: 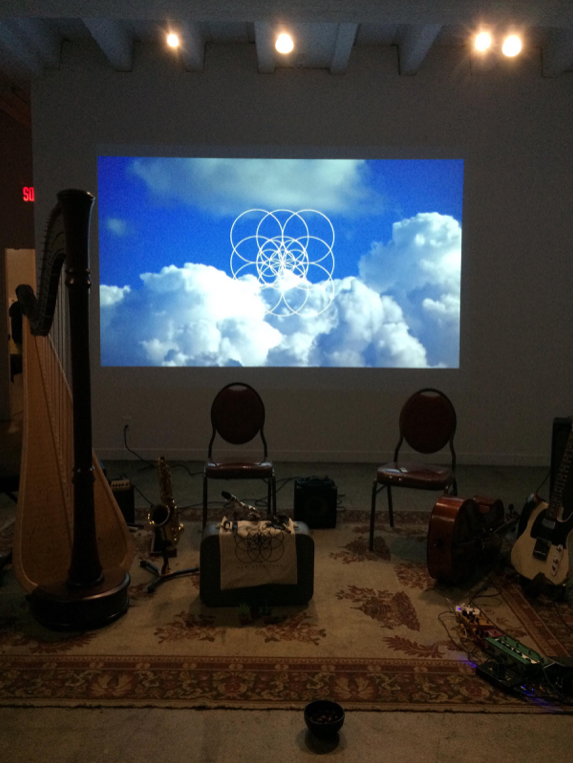 A sweet stage setup from New Hermitage's current tour.
7. When you’re not making music, what are you most likely to be found doing?

I: Like, eating, sleeping, that kind of thing?
R: Cartwheels and handstands, actually.
E: Eating cheese based nourishment.
A: Going to school. I am also a full time student these days.

8. What’s your perfect cure for a bad day?

R: Swimming
I: A perfect avocado. Some ginseng tea.
E: Ricochet Robots or playing chess.com.
A: Letting it ride out. There is no cure.

9. What’s the best part about being in a band?

R: The jokes, the snacks, the togetherness.
E: Street Cred.
I: The fame and fortune. Don’t write that. I second the jokes.
A: It (music) gets better with time. Seeing the country and meeting new people.

10. What do you do when you wanna treat yourself?

I: Take a bath, I guess. Read the New Yorker! Actually, no, that’s not true. I go to the woods to treat myself.
R: Playing the tambourine and watching blue planet in the daytime.
E: Reading in a sweet hammock.
A: I go to the movies, and I spend the $30 for a popcorn and a drink. Also, in the daytime. Also, I am high.