Taking the fight to the streets

A mobile medical van is helping to treat hard-to-reach people for HIV/AIDS in Halifax and Dartmouth. 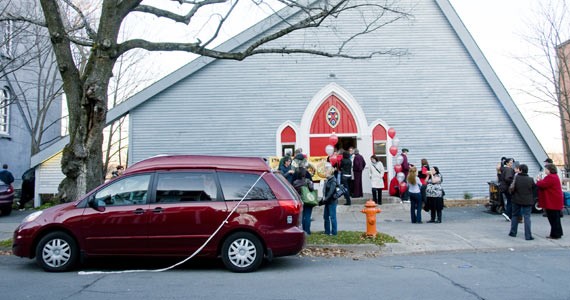 If you wander down Gottingen Street at night, you'll probably bump into a group of about a dozen people standing outside the Salvation Army. Some are just out for a smoke. Others are trying to figure out where they're going to sleep or grab their next meal. A handful suffer from mental health issues, disabilities or addictions, and a few are just passing through town. But everyone's eyes light up when asked about the nurses in the clinic on wheels.

"We need people like that," says Denny, a local man who's homeless.

"Oh yea, they're good. They're good, man," pipes in the guy standing beside him.

Halifax's Mobile Outreach Street Health program serves the people who fall through the cracks of the mainstream healthcare system every day. Nurse/coordinator Patti Melanson and her team work 12-hour days, docking their mobile clinic at shelters, soup kitchens, drop-in centres, street curbs and parking lots all over the city.

But even though the van works most every day, MOSH takes on added meaning December 1, World AIDS Day, because it is on the front line of health care services to people with AIDS and HIV, delivering the condoms, clean needles and drugs that best combat the disease.

MOSH's retrofitted Toyota van has a washable floor, a bucket seat in the back and a cabinet stuffed with medical supplies.

"We can kind of do just about anything there. We draw blood. We do dressing changes. We've done foot care. We've done immunizations," Melanson says proudly.

Having a MOSH health nurse around "makes people feel a little more secure," explains a newcomer to the Salvation Army. He's recently seen the nurse, "who was very nice and helpful," and likes the convenience of having health care onsite during the cold winter months.

Another man who's staying at the Salvation Army, John Williams, points out that the service is especially important "for the guys that are in wheelchairs and walkers and can't actually get out" and for people with mental health issues. "They don't have to leave and they can be looked after right in the building and feel safe."

The demand for MOSH's services, which are funded by Capital Health, is huge. Melanson and her team sometimes see around 270 patients in a month. MOSH serves those who are insecurely housed and face barriers when accessing health care. When basic needs aren't being met, life is chaotic and there's no stability, "getting to see a family doctor and getting a requisition for blood work and getting to the lab to have the blood work done is a very daunting task," explains Melanson.

People living in the margins of society often feel judged when they try to access mainstream care---they get "labelled as 'drug-seeking,'" says Melanson. "They know that they're not always going to be treated in the same way as somebody who's been able to keep it together when they're in the emergency room, or somebody who has been able to get showered."

Rene Ross, executive director of the local sex-worker advocacy and support organization Stepping Stone, feels MOSH fills a needed gap in services. "They're really making a real difference on the street," she says. Stepping Stone hits the streets with MOSH on Friday nights to do outreach, offering sex workers everything from vaccinations to housing referrals. Ross tells me that Melanson gave Stepping Stone's clients 13 flu shots in one night alone.

Karen Goudie, program coordinator at Feeding Others Dartmouth, says being able to provide MOSH services with free meals is "a godsend." She says it didn't take long for clients to start "swarming" nurse Monica Flynn in excitement when she'd drive up to the kitchen.

But regardless of the overwhelming community support, the MOSH team, which includes three nurses and an occupational therapist, is stretching itself a bit thin.

"We could really benefit from more staff, because the request or the level of care that we want to offer can be sometimes challenging to do, given the staffing that we have," says Melanson.

Melanson's work days as a nurse are jam- packed. She might find herself driving up and down Barrington Street, looking for a man who's wounds she knows need attention. The next minute she could wind up trying to gently broach the subject of detox with a homeless man who's been kicked out of several shelters due to his substance abuse. Then she might get a call from a local shelter, asking her to help an intravenous crack user find alternate injection sites on her body.

Melanson says it's a common misconception that people who use drugs intravenously don't care about their health: "A lot of the people that we meet, who are using intravenous drugs, are quite interested in their own health---in checking that they are OK and that they haven't contracted anything," she says.

"They go all over Halifax and Dartmouth and they go to the addicts with clean needles, condoms, stems---stuff like that," explains Denny in approval. "There's a lot of homeless people that need their help."

When MOSH began back in 2009, they gained the community's trust by working closely with Halifax's Mainline Needle Exchange. "I'm so appreciative for partnering with them," says Mainline program director Diane Bailey. Mainline and MOSH's joint services are crucial, as injection drug users account for almost 18 percent of HIV cases in Canada, and over a quarter of those living with HIV/AIDS don't know that they've contracted the disease.

"We've prioritized trying to work with people who are HIV positive in terms of supporting them to get appointments at the infectious disease clinic," explains Melanson. MOSH helps people who've just started taking an anti-retroviral cocktail stick to their regime, organizing pills in containers stamped with the day of the week. They also help people get to and from their methadone appointments.

Homeless and insecurely housed youth are at a heightened risk of contracting HIV/AIDS as well. Youth between the ages of 20 and 29 account for over a quarter of all positive HIV test reports. A 2007 study, "Syringe sharing among young drug users in Vancouver," revealed that street-involved youth who inject drugs also display a high-level of borrowing or lending syringes, adding to their vulnerability to HIV/AIDS.

Dorothy Patterson, who works at ARK Outreach Centre, says MOSH's services are essential to ARK's homeless youth clientele. MOSH nurses head to ARK twice a week, offering one-on-one care to ARK's clients. "ARK interacts with some of the most marginalized youth in our country," Patterson explains. These youth often face significant barriers to accessing health care, including "lack of identification, unpredictable schedules, no income and often discrimination by medical services unfamiliar with the realities of homelessness."

Melanson would like to tackle homelessness head on. For her, the key to health in our communities lies in addressing the causes---not just the symptoms---of poverty by expanding affordable housing. "People need stability and they need that anchor---that place where they put the key in the lock. We need to have a municipal and provincial government that thinks about those things and puts them on the agenda."