The theatre company leads you to yet another life-changing sight with a play that's also an app. 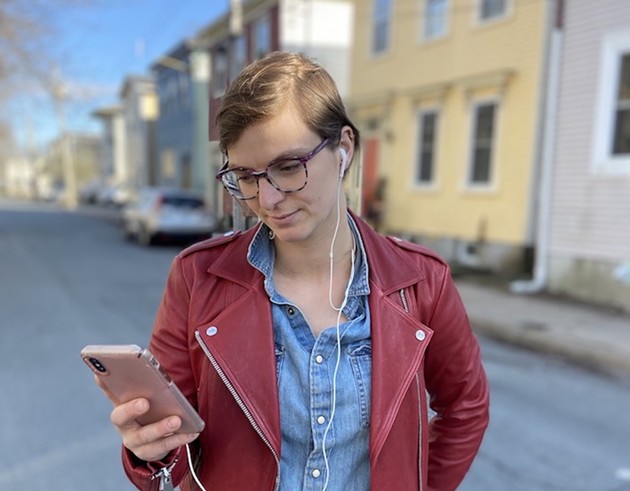 Alex McLean photo
A Vista20 user tapping her way through the app-slash-play.
Vista 20
Available until May 31
download the free app via mayworkshalifax.ca.


“Here’s a little experiment,” asks Vista20, a new web-based app by Halifax’s Zuppa Theatre Company. “Can you look around and drop the personal associations you have with your surroundings?”

Is that hard to do? Is it difficult to see just the “wirings”, as Zuppa puts it, of health and infrastructure—especially at a time like this?

That’s the question—or one of the questions—the theatre company explores with its curation of voices in a theatre experience for the age of COVID-19: The play-dressed-as-an-app Vista20.

“There’s this trope that’s going around that we’re all in this together,” says Stewart Legere, hands clasped, boxed into a small Zoom window on a bright Sunday morning. “And...while that’s true, the more we are aware of the world, we realize that’s not true, because there’s massive inequities depending on where you are and who you are.”

Legere, artistic associate with Zuppa Theatre, and one of troupe’s artistic directors, Alex McLean, are on a zoom call with The Coast, talking about the way COVID-19 and theatre intersect in the troupe’s latest piece, Vista20.

It’s not typical theatre—nothing’s typical these days—but it cuts to the heart of the COVID-19 with powerful, app-based storytelling.

What’s the heart? The experiences of those working in healthcare in Halifax during these strange days, their voices captured (archived) by recordings.

Vista20 is, yes, an app. And a play. It’s also a walking tour (but the walking part is not mandatory) which explores Halifax’s healthcare through the experiences of workers on the frontlines.

It’s a tap-through-able exploration, a story of a city, built on land lived on for 13 millennia, during an extraordinary time.

“It tries to give you space to think,” says McLean. “It’s meant to be this personal thing where you can reflect on your own. You have this moment to listen to other people’s thoughts and have your own.”

And, this whole project—app, interviews, production and release—was finished while social distancing was an ever-present addition to the Haligonian vocabulary. McLean and Legere biked around HRM’s empty streets to drop off and pick up recorders.

“It was more like being back in the old world,” says Legere with a laugh, “where you went to work and did things.”

But Vista20 would have looked different, you know, if everything hadn’t nosedived.  A previous project, Vista, released in 2019, was another sort of walking tour, with two actors providing a dialogue about the nature of cities, public health and progress—all to be experienced while walking around the English town of Torquay.

Vista20 was supposed to be the Halifax version of that. But with COVID-19 sweeping the country, Zuppa changed plans.

“We sort of had the infrastructure already,” says McLean, mentioning how Zuppas tackled digital, app-based productions before—always reminding its audience that a play can be listening to live vignettes while wandering around downtown (as in the enigmatic experience This Is Nowhere) or can be wearing a headset in a library and looking for clues (like the company’s 2017 theatre experiment, The Archive of Missing Things).

“We had all that—and were basically prepared to do a Halifax version of it.” But the end of the old world has a way of changing plans. (After all, Zuppa’s bones are still filled with the marrow of live performances, no matter which way the company surprises and challenges its viewers.)

“So much of what Zuppa has been about is getting the most out of an experience, and a live show,” says McLean. “That’s central to what we do. It’s always about that relationship between an audience and a thing, and so kind of with these app-based things, its taking that intimacy in a direction that veers away from the traditional theatre relationship.”

Live shows are dormant and thus, Zuppa has adapted: the deft editing of Vista20 supporting the voices it seeks to elevate.