From Gladstone to Strawberry Hill for more room, and more offerings.

Victoria Walton
Mohammed Harb said he encouraged his son Rafat to become an entrepreneur at a young age.
Rafat Harb is only 22 years old, but the recent NSCC graduate is already a business owner, working to open a market under the weight of the pandemic.

“I graduated in December 2020, I studied the adult learning program, for the high school diploma and I took courses for the business administration,” he says.

When he arrived in Canada from Syria in 2016, Harb spoke little English. But as the oldest of eight children, he took on the responsibility of running his family's halal butcher shop.

“I push him always. I help him to make something to give back for Canada because we came to Canada as refugees,” says his father, Mohammad Harb. Mohammad was an architect before coming to Canada, but options to get work were limited here, so the Harbs opened the Syrian Meat Shop on Gladstone Street in 2018.

“Because here in Canada different rules in my country, everything is different. The inspections, everything, different,” says Mohammad about not being able to get work as an architect.

That shop on Gladstone remained open for two-and-a-half years, selling fresh-cut halal meats as well as take-out food. But in February 2020, WM Fares Architects began the formal process of asking HRM if they could build an eight-storey, 86-unit condo building on the site that also housed Yellow Cab's main office.

The city hosted a public engagement process for the new development, but only 11 people showed up in-person to a May 19, 2019 open house, while just four people wrote emails.

The Harbs began looking for a new location once they knew about the coming changes and found their perfect new home at 3600 Strawberry Hill Street last March. The new location comes with a rebrand to Syriana Market.

They planned to open the new shop as soon as the old one was closed, but the pandemic changed that.

“Because of Covid, everything takes time,” says Rafat. “The occupancy permit, the food establishment permit, also everything about the social distance, the sanitizer, the masks."

The new location is more than double the size of the previous one, allowing Syriana Market to bring in plenty of new items and still allow for social distancing. 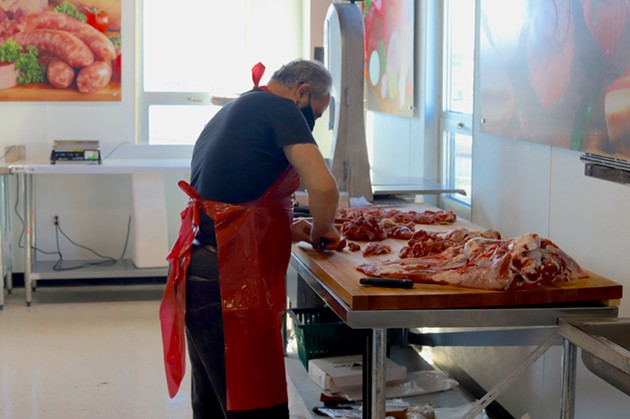 Victoria Walton
A butcher divides halal meat at Syriana Market the day before their grand opening.
The aisles of the market are lined with imported dried and canned goods and spices from Egypt to India, as the Harbs says they want to keep it multicultural, not just Syrian. Boxes of sweet pistachio-encrusted pastries are on display in one aisle. Across from those, piles of fresh mangoes being unboxed as the market prepares for opening day.

“It’s not only Syrian, it’s Canadian, multicultural,” says Rafat. “I have some customers from Halifax, Nova Scotia, New Brunswick, I get the support from the whole Nova Scotia.”

On the far side of the market, which is open 9am to 9pm daily, there's a wide-open dining area that leads to a kitchen where the chef, named Fadi, cooks. Adjacent to that is the butcher block, where an aproned man hacks away at halal beef and lamb.

People can dine-in or enjoy takeout of Middle Eastern food using fresh meats from the butcher, like chicken mandi, lamb kofta and beef kebabs cooked on a charcoal grill. Or if you prefer to cook at home, Syriana also offers cuts of meat prepared in-store, from lamb shank to sirloin steaks, ready to go.