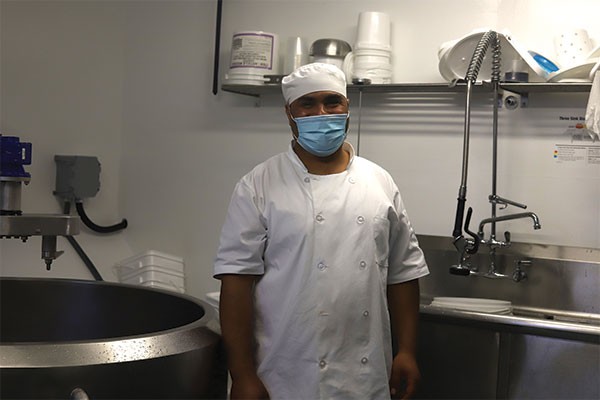 THE COAST
Marwan Ramadan came to Halifax in 2016 with years of cheesemaking knowledge.

Marwan Ramadan came to Halifax in 2016, bringing his expertise in Middle Eastern cheese with him. "My family made the cheese of all the world," he says. "I can make about 10 or 15. The same but a little bit different."

Originally from Homs, Syria, Ramadan grew up watching his mother make cheese before getting into the business himself. "When I was around 18 years old my brother opened a business in the city. In my village, I can work making cheese, and my brother sells the cheese in the city," Ramadan says.

After years of planning, his dream of opening a business in Canada is almost a reality, with help from volunteers Hassan Abdalbari and Patricia Betts.

"We are almost there, we've completed the whole process," says Abdalbari. "Patricia took the lead in communicating with the various departments of government, developed this very official and thorough business plan for the municipality, and we got the occupancy permit for the place."

Dairy Sweet Moon found space at 3555 Robie Street, the basement of Brilliance Computer Technologies, which just so happens to be the prior location of Blue Harbour Cheese. 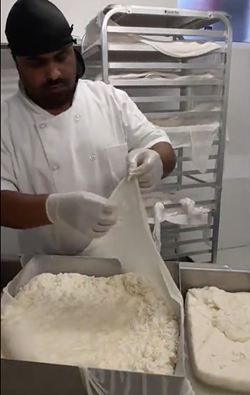 "This had been where Lyndell Findlay, who's been really helpful, started her cheese business," says Betts. "We had luck. I think this place—it was serendipity."

Dairy Sweet Moon's cheeses—which are all made with milk from Fox Hill—are soft and salty, similar to feta or halloumi. Some have different spices like fennel. They can also be used to make Middle Eastern desserts like kenafa and halawet el-jeben.

With the help of a few zero-interest investors and a 400-litre vat shipped from Holland, Ramadan has already made trial batches of his cheeses, that went with a health inspector to evaluate. "She came here watching him to see the process. From A to Z, she was with him, and then last week she took samples to her laboratory," says Abdalbari.

The cheese-making room itself is spotless, requiring shoe disinfection and a hairnet upon entry, as well as constant cleaning. "It's important," Ramadan says, "it's food."

Dairy Sweet will be on the market selling cheeses like ackawi and kenafa, as well as labneh yogurt, to local restaurants and stores as soon as the company gets final approval from the inspector.

"She said that you will receive an email with the go-ahead, so any moment now we expect to receive that email by Marwan to start processing and selling," says Abdalbari.

Now that he's so close to accomplishing his goal of opening a business, Ramadan isn't stopping. "I have some goals in the future," he says, like owning his own farm outside the city. "That's the dream."


Correction: A previous version of this article stated that Betts and Abdalbari are Ramadan's business partners, but in fact they are volunteering their time.