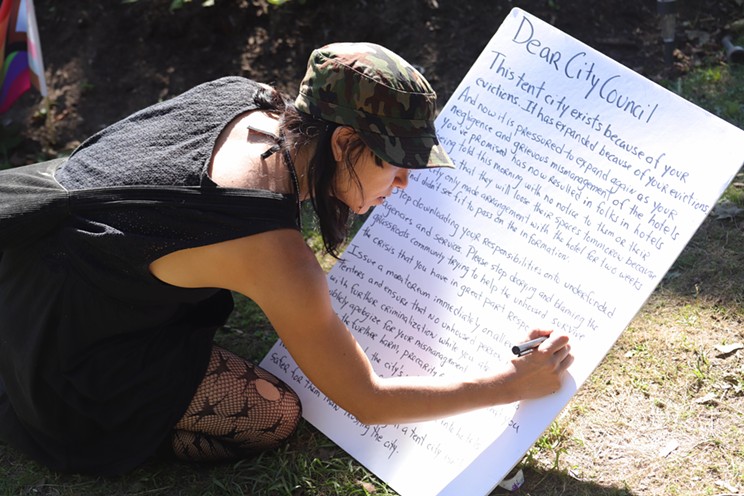 The Coast
Rachelle Sauvé writes a letter to the city on behalf of people with no safe place to sleep Wednesday night.

“Everybody that has been placed into temporary housing by the city’s program is going to lose their space tomorrow.”

Tuesday morning, a group of houseless people who had been evicted from public parks and put up by the city at the Comfort Hotel in Dartmouth got some disturbing news: once again, they are being evicted.

“We are a bit frantic this morning and quite upset,” says Rachelle Sauvé, site coordinator for P.A.D.S. Community Network, a group giving resources to those staying at Meagher Park—also known as People’s Park——on the corner of Dublin and Chebucto Streets in Halifax. P.A.D.S. is focused on helping people obtain permanent housing and other resources as well as providing advocacy, while the organization Halifax Mutual Aid is focused on building the temporary wooden crisis structures still seen at the park.

P.A.D.S. has previous contact with a handful of people who are currently at the Comfort Inn, but Sauvé doesn't know how exactly many people are staying there, because different outreach organizations don’t always communicate with each other.

“We received word this morning, through happenstance of talking to a cleaner at the hotel, that everybody that has been placed into temporary housing by the city’s program is going to lose their space tomorrow,” says Sauvé. “Nobody got any word of that. I’ve talked to people’s housing support workers and they all just found out this morning.”

Two weeks ago, HRM senior policy advisor Mary Chisholm reportedly got in touch with the Comfort Inn on Windmill Road in Dartmouth about providing temporary accommodations for some of the people who had recently been evicted from public parks. The general manager of the Comfort Inn, Mary Vandergrift, told the city she had 10 rooms available, but only for 14 days.

“When the city called me two weeks ago to book them, that’s all the time I told them I had, was two weeks,” Vandergrift told The Coast in a phone call Tuesday afternoon. “They just said, ‘OK, thanks for confirming that that’s all you had.’”

Vandergrift, when asked if she knew where the residents would be going next, sounded frustrated the city hadn’t given her an update lately. “I hadn’t heard from them for a couple of days,” she says. “I understood it was all taken care of.”

When the soon-to-be-evicted residents approached hotel staff after learning they’d have to leave, Vandergrift was taken off guard. “I was surprised when no one knew, I was shocked.” She says she reached out to HRM but hasn’t heard back yet. “I sent them an email today, it’s ridiculous.”

Google Maps
The city coordinated rental of 10 rooms at the Comfort Inn in Dartmouth.

The Coast contacted the city to confirm these details, to which an HRM spokesperson says as of the eviction day of September 15, five people—down from eight last weekend—were staying in the 10 available rooms at the hotel.

Sauvé says residents who are being evicted from the hotel have shown up at People’s Park in tears. “It’s just too much, it’s just too many rounds of being told you don’t belong,” she says. “Folks who have been waiting patiently for weeks without any word from the city or any services, about moving into their hotel rooms, those same folks are now saying ‘if we're just going to get kicked out a few days later, then we're safer at a tent city in the cold in the rain,’ because that's going to be less precarious.”

Eric Jonsson, the sole Street Navigation Outreach worker for the entire peninsula, was on-site at People’s Park on Tuesday afternoon alongside the Mobile Outreach Street Health van. “I heard rumours last week that it was a limited amount of time,” he tells The Coast about the hotel stay. “I probably could have confirmed if I really wanted to, but I had other things to do.”

Jonsson says it’s common for the city to use hotels as a short-term housing solution, but that each situation is unique. ”Sometimes it's just until you get kicked out,” he says. “Sometimes it's until the rooms are booked, which I guess is what happened with this hotel, is that they had other bookings there.”

For those who took a room in the Comfort Inn, Jonsson says unfortunately they were never promised a certain length of stay by the city.

“I'm a big fan of under-promising and over-delivering. So if people were promised hotels for a long time, then that’s on whoever promised that,” he says. “I was pretty clear that I don't know how long they’re for.”

As of Tuesday, there were 18 people staying in tents and temporary shelters at People’s Park. Sauvé says she only expects that number to grow over the coming 24 hours as the hotel residents join them.

“We are crammed in as much as we can,” she says. “And we are not going to be able to say no to anybody who shows up in the middle of the night. That is against the model of compassion that we have.”