With most in-person events cancelled, market vendors are seeing decreased revenue this year.

the coast
Picture an autumn craft market: tiny tables filled with kitschy homemade items, baskets filled to the brim with fresh-baked loaves of bread and candles that smell like a crisp, dewy morning. And people. People everywhere. People milling about between tables, walking each and every way, touching everything and sampling goodies and hugging their friends.

Thanks to COVID-19, market scenes like this won’t exist this year. But one market—the Supernova Market—will spring up this coming Saturday, September 26.

The curated event with 30 vendors will be hosted at Rogers Square in Halifax, the only event to be held there in 2020, according to organizer Jacquelyn Miccolis.

"They were very excited when I approached them and asked if we could rent this space because like, their ideal events for this space are cultural, arts, you know, these types of events. So they were pretty quick to agree to booking us.”

The Supernova Market was first planned well before the pandemic, and Miccolis was forced to postpone from the original date in May and downsize her planning team to a one-woman operation.

“We had a date and everything and we had been advertising it, posters were all around the city, we had all the vendors chosen, we were ready to go and then, well, the whole city shut down,” she tells The Coast.

The vendors will range from Glitterbean Cafe and Good Parma to Shimmering Seas Jewelry and Travis Smith art. Because it's a curated market, no one will be selling the same thing.

“We made sure that there were no overlaps. So every type of vendor is representing their type of product,” Miccolis says. “Because a lot of vendors are hurting right now because there’s nowhere else to sell, we want to maximize the chance for them to profit and have a good experience.” 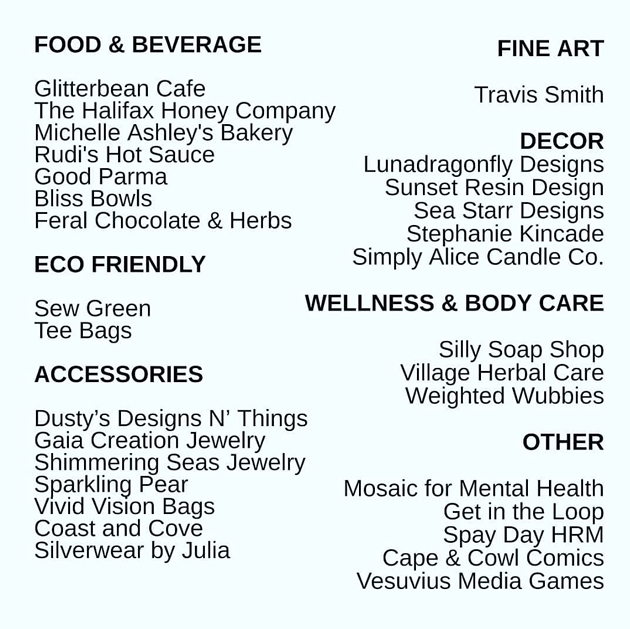 instagram
The full list of vendors for the Supernova Market.
Many of the vendors are regulars at the Seaport Farmers Market, where Miccolis also has connections.

“I’m hoping a lot of people will be excited to come down and support some of the Seaport Market vendors that haven’t been able to get the sales that they are used to,” she says. “The Seaport Market just recently reopened only a couple weeks ago. I don’t think they’re getting the foot traffic that they hoped for and a lot of the vendors haven’t returned, so I’m hoping that this will be kind of a good compensation."

Though the vendors are familiar faces in the Halifax craft community, the market will look a bit different than the markets of the days of yore (six months ago before Covid).

“We hired a bunch of security so we’re going to have an arbour entrance, an arbour exit, all the area roped off to ensure that no more than 250 people are inside at a time as per, right now, the provincial guidelines and laws for the pandemic,” says Miccolis.

Although Rogers Square is considered an outdoor space, because it’s a private event masks will be mandatory. There will also be directional marking on the ground and a one-way flow of foot traffic inside the market space.

“Originally when I talked to the venue they said 45 [vendors] but this was prior to the pandemic. So, we cut it down a bit so we can ensure the two-meter distance between each vendor,” says Miccolis.

The event is from 1-6pm on Saturday, and the first hour will also include a dance performance from local bellydance group The Halifax Shimmy Mob, who are raising money for Alice House. “It’s a nice little thing to be able to give them the space to raise the money that they would’ve missed out on,” says Miccolis.

Although the Supernova Market is only a one-day event, Miccolis hopes it can make up a bit for all the other markets that have been cancelled, postponed or seen a lack of customers.

With the holiday shopping season looming, holiday craft markets are trying to find ways to make their 2020 events work. In mid-September, the Christmas at the Forum announced they will be going ahead with a different, yet-to-be-announced, form of the market.

“Right now, with indoor venues having such a small cap on what they’re allowed to have there’d be no way to host a craft market like that,” says Miccolis. “And really there is no covered outdoor venues besides Rogers Square, and outdoor markets are not usually as popular because of the weather being so unpredictable in Nova Scotia.”

Based on the success of the Supernova Market this weekend, there may be a December edition, Miccolis says, “I’m hoping if this event goes off without a hitch I’ll host another during the holiday season.”