A look at who’ll be in the spotlight both inside and out during 2018’s sunny season.

By Carey Bray and Lara Lewis

To June 23
Theatre Arts Guild: Death & The Maiden
If you’re looking for some dark dramatic fare, TAG is offering up Ariel Dorfman’s 1992 taut political play, Death & The Maiden. It follows the story of Paulina Escobar, a South American political activist traumatized by an incident in which she was raped and abused by an unidentified assailant. Since freed, Paulina is haunted by her monster’s voice. Safe to say tensions will come to a boil when her husband unwittingly invites her unknown tormentor home for a drink.
Pond Playhouse, 6 Parkhill Road, $15-$18, tagtheatre.com

July 1- September 2
Shakespeare By The Sea
Shakespeare By The Sea returns for its 25th season with a new slew of shows being performed by a cast of tried and true alumni actors. The new summer kicks off with the family play, Alice in Wonderland (July 1st). Following suit are two classics Othello (July 12th), and Twelfth Night (July 27th). For a refreshing break in tradition, it has also been announced that on the closing night of the season, September 2nd, there will be Unrehearsed Dream— a take on A Midsummer Night’s Dream. Actors will rehearse their roles independently during the day and then come together to perform for a night that’s sure to be an entertaining time.
Park Place Theatre and Cambridge Battery, Point Pleasant Park, $20-$25, shakespearebythesea.ca 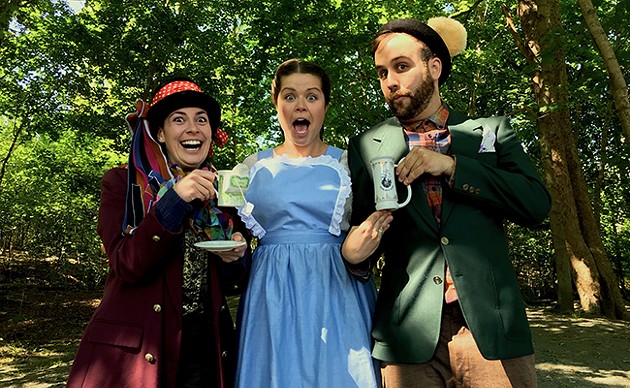 SUBMITTED
Shakespeare by the Sea does Alice in Wonderland
OUT OF TOWN
July 3-August 25
Chester Playhouse
The Chester Playhouse’s summer season features a wide range of local and touring artists. Among them is Tidal Women Braving the Storm by the Other Women Theatre Collective (July 18-21). Mixing poetry, music, storytelling and theatre, Tidal Women tells the story of different women from different times and places, connected by their lives by the sea. Collectively created by Laurel Darnell, Sue Evans and Cynthia Myers. Other shows include Jake’s Gift (August 1-4), a one-person show set at Juno Beach, and Mary Poppins Jr. (August 15-18), put up by the Playhouse’s summer school. The season is topped off by 2b theatre company’s Yann Martel adaptation One Discordant Violin, which premiered in Halifax in February.
22 Pleasant Street, Chester, $15-$31, chesterplayhouse.ca

OUT OF TOWN
July 3-August 25
Festival Antigonish
Festival Antigonish’s 2018 season has summer theatre for the whole family. Burnin’ Love by Sharon Bajer (July 18-August 25) is the story of a young woman who encounters Elvis Presley as her spiritual guide in a coma dream. The rock n’ roll musical has all the fun of a theatre show and an Elvis impersonator concert. Also in the season are Big Sister, Little Brother (July 24-August 18), a take on The Emperor’s New Clothes directed by Richie Wilcox, and Norm Foster’s Maritime love story Lunenburg, running the entirety of the season.
1 West Street, Antigonish, $12-$38, festivalantigonish.ca

July 3-August 26
Neptune Theatre
ABBA fans, rejoice—if you haven’t gotten a chance to see it yet, Neptune has once again extended its run of Mamma Mia! until July 15. In other July-related news, head over to the Scotiabank Stage for Argyle Street Kitchen Party (July 3-July 29): Hosted by Ian Sherwood and a different guest star every night, this show’s set to tap into the vein of Maritime revelry. If you’re still up for mo’ theatre, check out Five Guys Named Moe (August 7-26), piece about a heartbroken man named Nomax who meets five men who’re determined to heal his lovesick heart.
Neptune Theatre Scotiabank Stage, 1593 Argyle Street, $32-$40, neptunetheatre.com

OUT OF TOWN
July 4-September 2
Ship’s Company Theatre
Artistic producer Natasha MacLellan is gearing up for an ambitious summer by directing two plays. The first, Hook Line & Sinner (July 4-29), is written by Mary-Colin Chisholm and is the story of Sister Vivian, a nun, called in to defend a friend/ex-flame being accused of murder. Challenging conceptions of objectivity when it deals with those closest to us, it’s a murder mystery set a little too close to home. Any Given Moment by Kim Parkhill (August 8-September 2) deals with globally charged issues that could potentially blow a small Ontario town apart. On August 1-2, multi-media event Burnwater: Alchemy takes over the Ship’s second stage. Featuring differing forms of self-expression, Burnwater centres on the various creations of artist John Little.
18 Lower Main Street, Parrsboro, $10-$30, shipscompanytheatre.com

OUT OF TOWN
July 4-September 1
Two Planks and a Passion Theatre
Two Planks has an exciting season ahead. It features two fireside productions: A new musical adaptation of George Orwell’s Animal Farm, followed by Elapultiek, a new play by Shalan Joudry about a reconciliatory encounter between a Mi’kmaw biologist and her settler counterpart. On the this year is an adaptation of Uncle Vanya, North Mountain Vanya, by artistic director Ken Schwartz. In this version, the Russian countryside is replaced by the Annapolis Valley, taking advantage of the company’s lush rural location.
Ross Creek Centre for the Arts, 555 Ross Creek Road, Canning, $10-$30, artscentre.ca/twoplanks.html

August 31-September 9
Halifax Fringe Festival
Fringe returns once again for its 28th one-of-a-kind festival. Proud of its eclecticism, Fringe always guarantees that no two acts will be alike. Hosted in more than 10 venues all over Halifax, audiences will be provided with 11 days’ worth of entertainment from actors hailing from both Nova Scotia and beyond. Stay sharp for a late-summer announcement of the various acts that’ll be underway across the city.
halifaxfringe.ca