Human Rights Commission study on controversial police practice—originally due this month—won't be ready for another eight weeks. 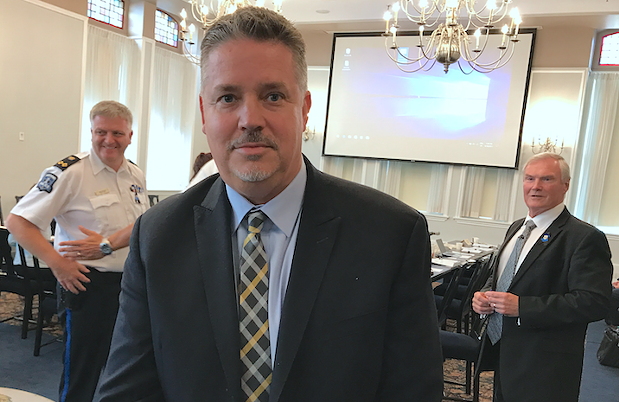 THE COAST
Scot Wortley, flanked by deputy chief Robin McNeil (left) and board of commissioners former chair Steve Craig (right), when he was hired, 17 months ago.

The much-anticipated report on Halifax police street checks will have to wait a little while longer.

Jeff Overmars, for the Nova Scotia Human Rights Commission, says the report will be released March 27. That’s two months after the public was expecting to see a copy, and over two years since data collected on the surveillance tactic found that local police were three times as likely to “street check” a Black resident of HRM than a white one.

Statistics on the use of street checks weren’t analyzed by Halifax police until a CBC investigation in early 2017, which confirmed what many in the Black community had been anecdotally saying for years—people of colour in this city are much more likely to be stopped, questioned or even just surveilled by police. African Nova Scotians accounted for over 11 of individuals “street checked” by Halifax police, despite making up just 3.6 of the municipality’s population.

“ Wortley is still finishing of his research, data,” says Overmars, over email. “The report isn’t complete yet.”

Both the Human Rights Commission and police department have said the report would be ready for public release in January. As late as December 24, HRP’s public relations manager Neera Ritcey was prepping her team for a January release. (A draft communication plan about the report’s findings has already been completed.) Internal emails between Overmars and HRC legal counsel Kimberly Franklin from last month also confirm a January publication date.

The original deadline for Wortley’s findings was January 7, but in a December 2 email to Franklin, the criminology professor says he won’t be able to meet that target.

“This is really like writing a doctoral thesis—though far more important,” Wortley tells Franklin. “I really think I need four or five weeks of focused writing time to do the job to the best of my abilities.”

Wortley last visited Halifax in mid-December for a closed-door meeting of the Board of Police Commissioners to brief officials about his findings. In media interviews at the time, Wortley said the report was expected in late January.

The professor did not respond to The Coast’s questions about what’s causing the two-month delay in finishing his study.

The police department and the province have both deferred any decisions on new street check policies until Wortley’s report is released. Meanwhile, new data collected by CBC this week shows that Halifax police are performing fewer street checks, but visible minorities are still more likely to be on the receiving end.

Reporter Jack Julian writes that the number of street checks dropped by 28 between 2017 and 2018, but Black residents are now four times as likely to be stopped than white Haligonians. Police officials have maintained that street checks are a valuable intelligence tool in criminal investigations, yet Wortley tells The Coast those “details are often vague.”

As a result, the professor requested HRP collect 10 to 20 cases for his report where street checks helped solve a crime or clear someone of suspicion, in order to fully capture the police argument that “street checks are useful and serve an important role with respect to public safety.”

“I think that highlighting several clear examples of how street checks ‘worked’ would nicely supplement the quantitative data and help educate the public,” reads an email from Wortley to HRP researcher Chris Giacomantonio.

“This data request will be fully discussed in the final report along with a wealth of other statistical and qualitative data,” Wortley tells The Coast, “including the impact of street checks on the community.”

“A widespread program of random street checks involves considerable time and effort for service, with little to no verifiable results on the level of crime or even arrests,” writes justice Michael Tulloch.