The time is ripe for summer’s sweetest dessert, so hit the U-Pick and try baking this perfect this perfect biscuit.

Manual Co. first appeared on the scene with its pop-ups, under the moniker Manual Coffee & Baking, in the summer of 2013. Since then, Emma and Sonny Adamski have been focusing on elegant, thoughtful creations for custom catering jobs, but also blowing minds with their charming and meticulous donuts when they offered a donut subscription this past spring.

On Canada Day they delighted with a Strawberry Shortcake Pop-Up at the Stillwell Beergarden.

Strawberries burn bright in the summertime, nature's ultimate limited time offer. Since strawberries are at their fattest, ripest and most delicious right now, Emma Adamski is sharing her tips for her perfect shortcake so you can make the most of the short season.

"Like a lot of things that I love to eat, shortcake has this kind of very nostalgic place in my memory," Adamski says. "It totally takes me back to hanging out at my grandma's house—we'd go to the strawberry U-Pick and come home and she'd make the buttermilk biscuits, and I'd get to whip the cream. And so I think that I like it so much because I associate it with a time in my life that was really, really fun."

Adamski's process begins simply: "I start with the strawberries," she says. "Even though you want them to be fresh, and not cooked, you want to let them hang out in some sugar to kind of get the juices coming out of them. So I usually start by hulling the strawberries, quartering them and just kind of tossing them in some sugar." A squeeze of lemon juice and grating some lemon peel into the mix can add some additional brightness to the mix. 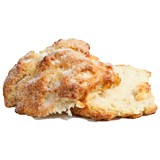 There are lots of foundations for shortcakes: sponge cake, angel food cakes, corn cakes, pound cakes. "We're totally guilty of the occasional no-name brand sponge cake with the little indent in the centre of it, and a can of Reddi-whip or whatever," says Adamski. But like Scully and Mulder, or Johnny and Baby, or Harry Styles and every teenage girl who has written first-person fanfic about him, there is one true pairing for shortcake.

"All I ever really want is a buttermilk biscuit," she says. "The biscuit, I think, is the most important part of the equation. It offers a lot of contrast to the sweet and juiciness of the strawberries, and the light, airy creamy, rich texture of the whipped cream," says Adamski. She says it's important to have "something that's crumbly, slightly salty, and has a really nice crust."

As for whipped cream, Adamski suggests just putting a smidge of sugar in. “If I have some vanilla around, like vanilla bean scrapings, because I like it visually. I also think it’s also important to add a little bit of salt into every part of the strawberry shortcake, because it makes the strawberries taste sweeter.” 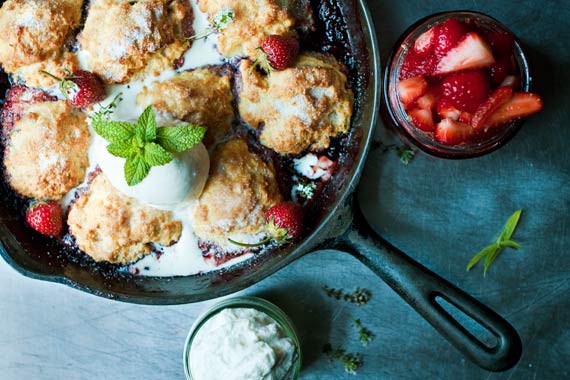 If you want to shake things up, Adamski suggests adding a campire vibe to your classic shortcake. "When we're at home—we live on a lake and we've got a fire outside—I'm always drawn to making things in cast-iron pans, just because it's easy. And I think sometimes later at night in the summertime when it cools off a little bit, it's to kind of have that warm, comforting take on it. I associate the classic one with barbecues and sunny days, and this is a more decadent, evening-time treat."

The vibe is different, but the ingredients are all the same. "Rather than leaving the strawberries raw, you just cook them slightly right in the pan before you throw it in the oven, and it totally changes the flavour," Adamski says. "It gets this sort of roasted, deep, intense strawberry flavour rather than the bright flavour from the fresh strawberries."

Once you've roasted out the strawberries a bit, just drop your scoops of biscuit batter on top, brush with egg wash, and bake until golden brown. Drop a scoop of your favourite ice cream on top, let it get gooey and enjoy.

You are also going to need: An oven heated to 375F. A pan with parchment paper.

You may also want: An egg, to make an egg wash. A bit of extra butter (melted) and some extra sugar to sprinkle on top.

Add the buttermilk and just mix it a little bit, until "it just comes into a goopy ball."

If you are making a large batch, Adamski suggests using an ice-cream scoop to form your biscuits. But she also says "you can just drop it by the spoonful onto a baking sheet with parchment paper."

Brush them with a bit of egg wash. Bake for 10 to 15 minutes, until golden on top and slightly browned on the bottom. Remove them from the oven, and, if you want, brush the top with melted butter and sprinkle with sugar.