After 10 years working in hair, the Halifax artist and stylist debuts her own space. 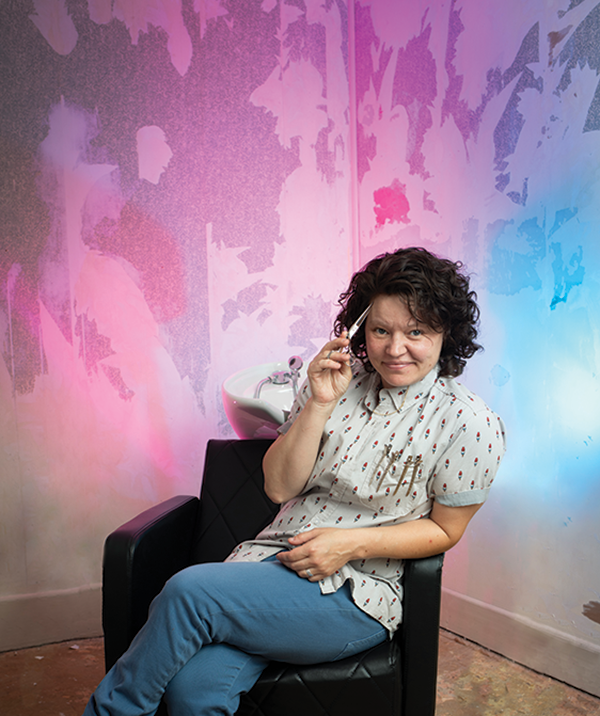 Getting entangled in the world of hair was something of a surprise for Steph McNair. While making a living working in art galleries and as a carpenter, the visual artist—inspired by a good friend's at-home salon—applied to go to hair school on a whim, and got in.

"I never went to salons. I was cutting my own hair and my cuts were like kitchen cuts, and sort of very intuitive," she says. "And people liked it so I thought, maybe I could do this as a career.

"I really liked the art or the craft of it— I'm still obsessed with getting technically better—but another part of getting into it was that I didn't feel like there was a place for me per se, or at least that I didn't feel comfortable. I would go in looking for a men's cut and they would maybe do some version of that, but always at the end would be feminizing it in a way."

That was 10 years ago. Since then, McNair's been an educator at Calgary's Aveda Institute, made a name for herself and her cuts at local salons and now is gearing up to move forward by opening a place of her own: Maneland Non-Binary Beauty. Taking over one of Vintage Row's colourful saltbox houses—the green one—McNair, who's currently in renovation mode, will offer a sneak peek of what's to come with a soft opening from July 18 to 28.

"It's a place for people who are non-binary or don't feel bound to one beauty standard," says McNair of the space, where acceptance and accessibility (including price point) are high priority. "Hopefully they'll be able to feel it's coming from that perspective first, instead of walking into somewhere and being like, 'OK I have to navigate through the cis world.'"

McNair wanted to open Maneland not just to create a space where her clients were seen and understood, but fellow folks working in the industry as well. She hopes to be able to offer apprenticeships and mentorships to up-and-comers who might feel like they don't fit into the mainstream beauty world.

"Not to say there's anything wrong with salons, but getting into the industry was challenging and still is challenging 10 years later," she says. "Even that word 'beautiful,' or 'beauty,' I used that word because it's sort of loaded. In some ways it's very feminine, but I wanted it to be like—no, you can feel like a beautiful person in your truest sense. That's my goal, to just let people be...and listen to them."

After the soft stint in July, Maneland will go on pause while McNair heads to New York, where she'll link up with inspiring stylists doing similar work at gender-neutral barbershops Hairari and Manetamed. She expects the salon to be back in action and in full swing on Queen Street by late summer.

"I think it's an honour to have somebody give over their trust to you. I like being able to take someone's often verbal descriptions and maybe a couple of pictures of what they like or don't like, and just creating a growing sculpture," she says. "Just like in art there are principles of design in haircutting, that was one of the first things that was like, 'Oh this is an art,' that made me think, this is my medium. I never finished art school in part because I was always searching for the right medium—I liked mixed media—and I think this is a good one."

How a doula training for Black women and non-binary people became a lesson in intersectionality.