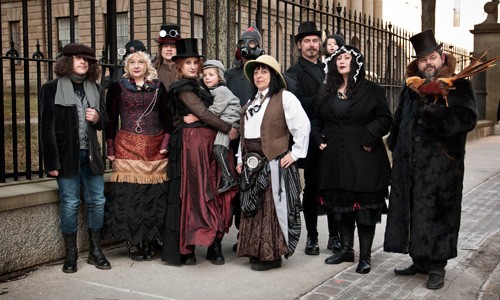 It's a Sunday afternoon and the upper floor of Humani-T Cafe looks like a turn-of-the-century French salon or Victorian pub. The people packed into the space are wearing lace, corsets, top hats and goggles and are more likely to take out a pocketwatch than a cell phone if they want to see what time it is. It's a meeting of the Jules Verne Phantastical Society, a group of people brought together by a love of all things steampunk.

On its Facebook page the JVPS defines steampunk as "science fiction literature hearkening back to the Industrial Revolution, and the art, craft and aesthetic which comes from that literature." Unlike sci-fi stories set in an imagined future, like Brave New World or 1984, steampunk tales are generally set in an alternate history with advanced technology.

"It's like if the future happened in the past," says Marina Smith, founder and presiden. Smith's love for the time period is clear in her work: she makes detailed jewellery pieces out of old watch parts from the 1800s.

Like Smith, a lot of fans are drawn to the genre because of the aesthetic. "I just love the clothes," Sarah Brunette says. "It's very refined, very detailled, very conservative. It's got that very high-class feel. But it also has that Oliver Twist, kind of grungy, kind of poor-person kind of feel to it."

Brunette is also a Nikola Tesla fangirl who's fascinated by the science in the stories, especially the airships: "I'm an aircraft maintenance engineer, so anything that flies in the air is of big interest to me."

Others, like librarian Andrew Aulenback, are drawn to the genre out of a love for classic literature by Jules Verne and HG Wells. Aside from being treasurer of the society, Aulenback also runs the group's book club.

"Even though they've all got widely different interests, they have an interest in common," he says.

The JVPS has started hosting events, including the Cabaret Absinthe on Saturday, February 11, a cabaret/dance at the Halifax Forum. Tickets are $15 and can be bought at Plan B Merchants Co-op at 2180 Gottingen Street. Monocles are purely optional.