Steak expectations at The Barrington

A perfectly cooked meal inspires some reflection on the tradition of steakhouses. 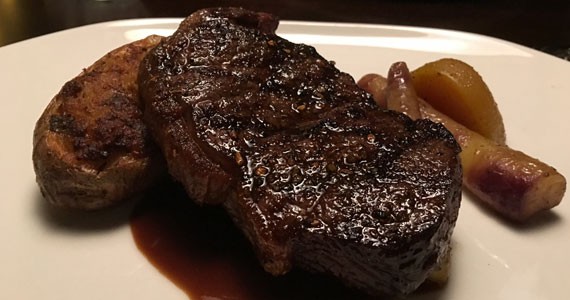 There are something like 30 million Google results for how to cook a perfect steak. Oil it, butter it, rub it, rest it, give it a hug and whisper affirmations at it. If anything in this world would ever prevent humanity from forming a hive mind, it will probably be true agreement over correctly eyeballing if a steak is cooked medium-rare. Picard’s preferred steak doneness could have easily been the McGuffin in Star Trek that defeated the Borg.

My strip steak at The Barrington is perfectly cooked—the colour is just a hair bloodier than a textbook medium-rare. That is the Keira Knightley doneness that I hold up my “To me you are perfect” sign for. It is probably also the type of medium rare that some other asshole would send back in a cork-sniffing customer-is-always-right or I’m-a-FOODIE display of smugness. (I realize I just wrote myself as the worst creep of a character only to call the other person an asshole in this parable.)

Only the very edge of the steak is inky with char with only a feathery bleed of dark brown fading into a firm centre that is dusky pink at the edges, the middle deepening to a rich sanguine bloom. I could have done with more aggressive seasoning, a saltier punch to really drive home the sear. But it’s good. It’s a $38 piece of meat that tastes just fine. It’s steak! And that is about as excited as I can get about a steakhouse. Because they are boring and expensive. Because they cater to an audience who wants to spend money on the same things they eat every day served in slightly better lighting. It doesn’t mean that steakhouses are devoid of quality—this one certainly isn’t—but it is almost always a staid affair. The charm is usually in the history of a steakhouse, and even though The Barrington lacks that I found myself wishing it had leaned more heavily into convention.

Here’s the thing: A steakhouse is never going to be the place we turn to because we want to be challenged. And it doesn’t have to be. Not every restaurant needs to be Momofuku—the world needs Morton’s. But bland modernity, presentation that shines with the erasure of originality, one-note plates are not fundamental to being an old standard. Not all classics are The Eagles.

And it’s the classic touches where I see opportunities for The Barrington to shine, those vintage steakhouse experiences like buttery broiled Oyster Rockefeller ($4.95) and a shrimp cocktail with zippy house-made cocktail sauce and a single shrimp ($8) so large when it was set in front of me I was afraid I’d start uncontrollably singing “Day-o.” Its fresh oyster menu ($3 ea) gives the restaurant a distinctly Atlantic character with the bracing salinity oysters like PEI’s Savage Blonde and the nutty, sweet emerald gem from Colville Bay.

I wish the menu ditched the standard sides and served the steak solo as in red coat steakhouses, that they would adopt more classic add-ons like creamed spinach, Brussels sprouts, cauliflower and green beans. I also wish the three-ounce splashes of red wine ($12-$18), served in glasses large enough to make the wine look like a flavour rinse, were less absurdly priced.

That said, the restaurant is appealing. The space—cavernous with warm wooden angles softened by the velvety grey and sprawling with large yet intimate tables, a luxuriously comfortable exception in what has become a city clattering with backless stools and tiny tables crammed around wooden benches—is lush and inviting. And service is exceptional: Mehvy is the type of server who makes you want to go back just to be able to tip her again. And the steak was good. It’s just...it’s steak!

Where I Work: Creamy Rainbow Bakery and Cafe