The 79th Venice International Film Festival got off to a superb start Wednesday, August 31, with Noah Baumbach’s White Noise opening the festival.

Stars Adam Driver, Greta Gerwig, Raffey Cassidy and Don Cheadle all graced the red carpet as they made their entrance to the premiere.

Alexander Zyuryaev
Adam Driver, one of the stars of Noah Baumach's White Noise, which kicked off the festival.

The opening ceremony was hosted by Spanish actress and presenter Rocio Munoz Morales, and began with the ceremony for the Golden Lion for Lifetime Achievement, which was presented to renowned French actress Catherine Deneuve.

Among the guests to add a fashionable flair to the red carpet were models Alessandra Ambrosio, Isabeli Fontana and Barbara Palvin, as well as actor Dylan Sprouse.

Thursday night will see the arrival of Cate Blanchett, Julian Glover, Mark Strong and Noémie Merlant for the premiere of the drama/musical Tár from director Todd Field.

Stay tuned for more daily highlights, news and photos as the stars continue to grace the red carpet in Venice. 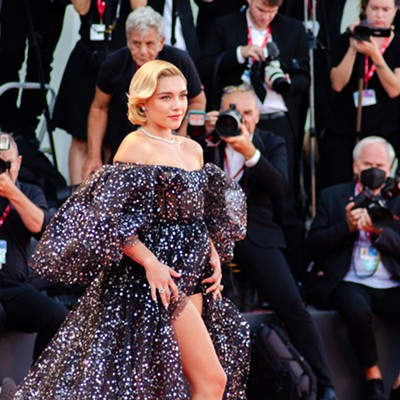