Annie Clark was on fire; thankfully, the tent was not 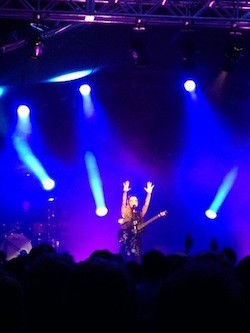 Asheley Ramey (via Instagram)
Ten minutes before St. Vincent’s wildly anticipated Halifax Jazz Festival appearance on Monday night, announcements encouraging fans to clear the venue’s aisles to satisfy fire code went essentially unheard (to the apparent chagrin of the fire marshal). Not surprising. When St. Vincent is in town, safety regulations be damned—Annie Clark brought her effervescent mind-bend of a show to Halifax, and a conglomerate of indie bros and jazz festival patrons alike wanted to press themselves as close as possible to her blinding musical beacon. This was important.

Clark has reached the point in her career where a 14-song headlining set isn’t enough to cover all of her hits, let alone mine the depths of her dense discography. Her 80-minute Halifax set ran perhaps a touch short, especially considering the lack of a proper encore. Did it matter though? Of course not. While there were no unenjoyable moments in the show, Clark’s mid-set knockout of “Surgeon,” “Cheerleader” and “Prince Johnny” provided an especially thrilling showcase of musicianship. With every lash at her strings, flick of her eyes and curl of her tongue, Clark had the entire crowd eating straight out of her hands—exactly where she wanted us. Halifax, we are so lucky.