Voters, politicians and overseers are gearing up for a late-spring provincial election. 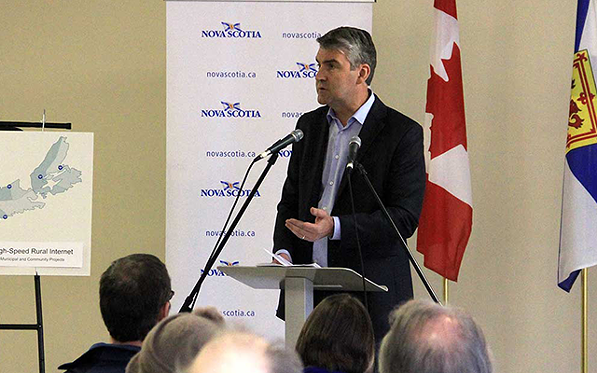 via NS Liberals
Premier Stephen McNeil announcing new funding for high-speed internet last month.
The winds of war, on the political front, are upon us.

Nova Scotia’s Liberal government has been bombing the province with pre-election funding announcements, political parties are assembling their roster of candidates (who are keeping campaign ammunition at the ready) and Elections Nova Scotia is gearing up for the multi-million-dollar job of overseeing the vote.

Since the province has no fixed election date, staff at the non-partisan agency have been ready to roll for some time now.

“We have a number of plans that are always in place” to help prepare for the next election, says Andy LeBlanc, spokesperson for Elections Nova Scotia. There’s a lot “that goes on behind the scenes, and between elections.”

LeBlanc says his office is monitoring news reports, which have included speculation about when Nova Scotians will head to the polls. “We listen to the same media that you might listen to, and so we listen to where things are.”

According to Elections Nova Scotia, there are about 750,000 registered electors in the province. History has shown many of those people choose not to mark their X when the opportunity arises, despite concerted efforts made to improve voter turnout.

In the 2013 provincial election, 58.2 percent of electors voted. Four years earlier, the turnout was 57.9 percent.

David Johnson, a political science professor at Cape Breton University, says the best way to improve voter turnout is for “an exciting campaign” to take place, one which involves a cranky electorate ready for a change at Province House.

“That seems unlikely this time, meaning that we will probably see turnout levels look similar to past elections, maybe even decline a bit,” he says.

To get this province election-ready, several crucial tasks must be completed by Elections Nova Scotia. Among them: hire 51 returning officers and other election workers, rent accessible polling places, prepare and purchase advertising, supervise the process involving registered candidates and administer voting on alternative days and election day.

LeBlanc says all returning officers have been hired. Elections Nova Scotia employs 18 people but will need about 6,000 temporary workers for the general election.

Planning and executing the 2013 election cost about $9.4 million. The next one will likely be more than that, LeBlanc tells The Coast.

On its website, Elections Nova Scotia regularly updates its grid of hopefuls running for office under the banners of Atlantica, Green, Liberal, NDP, Progressive Conservative and independent.

If you are a Canadian citizen and age 18 or older on voting day, and have lived in the province for at least six months prior to the election date, then you can vote. Elections Nova Scotia’s website also has information for voters with special needs, including homeless citizens.

Voters living temporarily outside the province can apply to vote by mail. Once an application is approved by Elections Nova Scotia, the voter a kit with instructions.

Politicians at Nova Scotia’s legislature will reconvene for the spring sitting on April 25. The Liberals’ budget is to follow two days later.

“It’s looking highly likely that the election will be called shortly after the provincial budget is introduced into the House of Assembly,” says Johnson. Pre-budget announcements that have already been made, he says, are telegraphing a “good-news” budget and “will be the lead-off to a spring election.”

11 things that changed Sunday around COVID-19

Rolling out the red carpet