Speaking for The Coast: Shame, fear and access to information 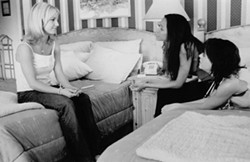 film still via imdb.com
The movie Crossroads— with Britney Spears, Zoe Saldana and Taryn Manning—was what counted as an information source on ending a pregnancy.

I have not had an abortion. I am not a doctor. I am a white woman with immigrant parents who is a settler in Halifax. I benefit from a healthcare system that is optimized for people who look and speak like me. But when I was around 17 years old, I often repeatedly punched myself very hard right below my belly button.

I had insufficient access to all things sexual education and sexual health. It was a black hole of information. Getting pregnant—I was told, I understood—was the worst thing that could happen to me. And the only thing I knew about how to end a pregnancy I learned from Mimi (Taryn Manning) falling down a set of stairs in the 2002 movie Crossroads. Blunt force.

I was on birth control. I did not understand how anything worked. I did not know I was allowed to ask how things worked.

In The Coast's pursuit of increasing access to information, of talking about abortion, I discovered that the black hole still exists. The right information, helpful information is inadequate, a moving target. Fact-checking medical policy that's in flux is difficult. Fact checking medical policy that's in flux and that gets co-opted by politics in fierce opposition, is exhausting. Misinformation and lack of information facilitate one thing best—uncertainty. Uncertainty breeds silence and shame. Shame is good friends with fear and here we are: uninformed and telling no one about it.

People in power repealing sexual education are contributing to this silence. Dangerous legislation in the US is capitalizing on this silence. The Coast is making space for these stories to take on this silence, and fill it with lived experiences and our best attempt at up-to-date information about access.

Connect with me at news@thecoast.ca.