Soundbytes festival kicks off this weekend

Fill your ears and boots with a month-long celebration of art, audio and hybrid music. 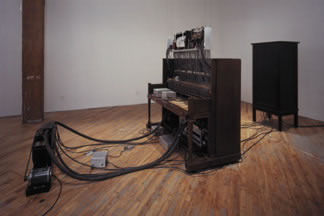 Last night the Soundbytes festival kicked off with a performance at Saint Mary's University Art Gallery and an opening of Resounding, at Dalhousie Art Gallery. The Dal staff are such a class act, you'd never know it's been a tough week at the arts centre—a bronze bust of pianist Ellen Ballon was stolen late last week; gallery director Peter Dykhius told me there have been some leads and they'll make a news update today. (UPDATE: The bust was returned anonymously, with only minimal damage.) 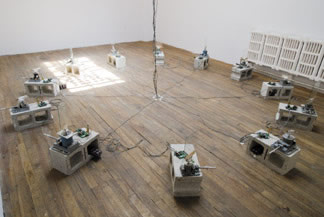 Artist Marla Hlady deconstructed a piano that is run by various technologies. I love all the cables required to make it work, like a human body with lungs and hands and a brain. But the sounds it makes are not what you think. Daniel Olson, who uses everyday objects like pasta cutters, turning domestic noise into performative art, will be in town on June 11 to perform Coloured Plates, which will be a cathartic experience, I think, watching him toss a box full of the small plates, one by one, on the floor. For Peter Flemming's Stepper Motor Choir, there are 12 small motors, sitting on top of concrete blocks, that spin panes of solar glass, which create ringing sounds, based on the speed of the motor. OK, so the art gallery is in the basement of the arts centre, so you'd think the solar power is a problem, but there are black cables leading up the walls and up to the second floor balcony where it's collected. That's cool. Another cool thing is that the solar panels will be reused after the exhibition by the university's new School of Sustainabilty.

Jennifer Allora and Guillermo Calzadilla’s video Returning a Sound was shot on the Puerto Rican island of Vieques, shortly after the island ceased to be a bomb-testing territory for the military. For 60 years, citizens weren't allowed to walk through the entire island, so when you watch the video, you'll understand the elation and meaning behind this simple act of driving over roads on a motorcycle, with a trumpet attached to your tailpipe. Scroll down to see a clip of the video and the artists' explanation, from Art 21, here.

A great opening to what should be a fantastic month. There's Sometimes Always, a show focusing on musicians who play with obsolete music technologies which opens at the AGNS next Friday. On June 10, things will get steamy at an audio bath house, at Seadogs. I'm looking forward to Vessna Perunovich's opening at SMU on June 26. When I worked at a museum in Toronto, she had created this amazing series of sculptures, using only pantyhose and hangers. And there are plenty more performances, radio broadcasts, concerts and more, all month-long. Go to soundbytes.ca.