Two of the iconic Dartmouth birds have died, and another is injured after being struck by a vehicle on Wednesday evening. 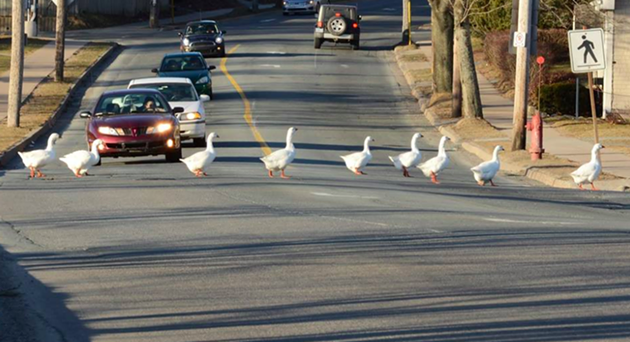 VIA FACEBOOK
Photographer Rick Gautreau captured the geese crossing the road safely in this photograph from a few years ago.
Police say a driver who ran over the beloved Sullivan’s Pond geese Wednesday evening—killing two of the animals and injuring a third—won't be facing any charges.

The incident occurred just before at the Prince Albert Road crosswalk near Elliot Street.

According to a press release from Halifax Regional Police, one goose died at the scene. Another was taken to the vet, where it passed away.

The third goose continued swimming to the Sullivan’s Pond island. Its condition is currently being monitored by volunteers.

While a flurry of social media posts by alleged witnesses have claimed the hit-and-run was intentional, police say the male driver didn’t see the geese before striking them.

“Witnesses confirm that speed was not a factor in this incident,” HRP’s press release states. “No charges have been laid.”

So sad to hear about our #Dartmouth geese. They're some of our most popular residents.
Be mindful out there. This is a busy crossing for all pic.twitter.com/bQMySlualo

Sad to hear that we've lost two of the geese at Sullivan's Pond due to a reckless driver hitting them in their usual crosswalk.

Oh no, I am so sad. I was just looking at them last night and thinking they are so beautiful and that we are so lucky to have them.


The pond’s domestic white geese are iconic mascots of Dartmouth. They’ve been a visible presence in and around Sullivan’s Pond for decades.

So the news that two of the nine remaining geese were killed by a careless driver has naturally been met with extreme emotion.

Some fucking asshole ran over & killed two geese at Sullivan's Pond? I'm fucking furious.
They were better pedestrians than most people.

I'm not advocating vigilantism, but if if someone catches this sick fuck and drowns them in Sullivan's Pond, I won't be mad. https://t.co/a4foqkhSGB

There were 20 pedestrians struck by cars in June. That’s double the number of collisions in May and an increase of seven from the same time last year.

In the first six months of there have been 104 vehicle/pedestrian collisions in HRM, 68 percent of which occurred in crosswalks.