This problem will need money, but throwing money at the problem isn't necessarily the answer. 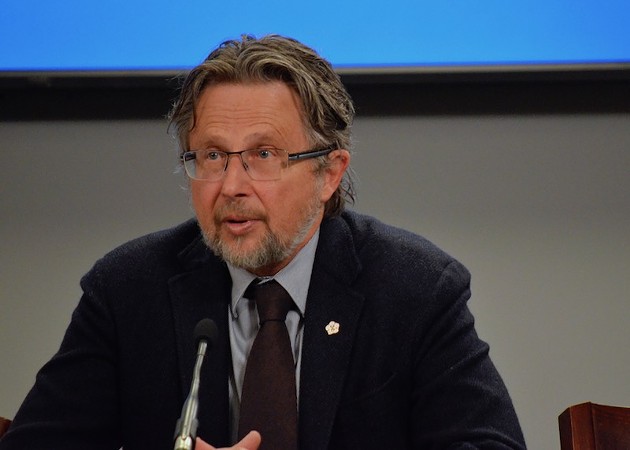 King's College Investigative Workshop
Dr. Stan Kutcher says depression is the world's most disabling illness, yet it doesn't receive funding "in keeping with the border of the disease."

The woman in charge of the revamp of Nova Scotia’s mental health system says there is “absolutely no doubt” more money is going to be needed to fix it, but she’s not preparing a bill just yet. Linda Courey says a lot of other problems have to be solved first.

Courey is senior director of mental health and addictions with the Nova Scotia Health Authority. The authority has embarked on a five-to-10 year process to reform the system so it can deliver effective and timely care. The authority is examining such things as the best ways to deliver care, and how it should prioritize patients for access.

“It is extremely difficult to even think about money until we reorganize our system to be more efficient and effective,” Courey says. “Why would I throw money into a system that really isn’t working well, certainly not as well as it should?”

There is broad consensus that Nova Scotia and other Canadian jurisdictions spend nothing like what they should on mental health.

“We know that depression is the number one disabling illness in the world, but we know that the proportion of funding that goes to mental health care from the rest of health care is not in keeping with the burden of the disease,” says Stan Kutcher. The Sun Life Chair in Adolescent Mental Health at Dalhousie University’s Department of Psychiatry, Kutcher is a former Liberal Party candidate, and one of the best-known advocates for mental health in Nova Scotia. He was part of the expert panel assembled to look for ways to improve the system in Nova Scotia this past year.

The Nova Scotia estimates for 2015-16 (the last year for which both budget and physician billing information were available) show total money allocated to the Nova Scotia Health Authority and the IWK for mental health services was $139 million, with another $9 million spent directly by the health department. The 2015-16 total billed by psychiatrists and family doctors to the provincial medical insurance plan was about $63 million, bringing total spending on mental health to more than $210 million, an impressive-sounding number.

In PEI, the similar number is $33 million. That’s made up of $2.1 million spent directly by the Department of Health and Wellness, $27.5 million by the provincial health authority—Health PEI—and $3.6 million in billings to PEI health insurance by psychiatrists and GPs.

But when these numbers are compared to total health spending in each province, they don’t look quite so large. For example, the $211 million spent in Nova Scotia works out to a little more than five per cent of the total budget of the department of health and wellness. It’s about the same in PEI.

That said, Peter Vaughan, who retired in December as deputy minister in Nova Scotia’s Department of Health and Wellness, agrees with Courey that government has to be cautious about just spending more. “You can't improve the health care system by just throwing money at it,” he says. “We did that for 10 years and we are in the situation we are because that's all we did. We didn’t actually change anything. We actually just paid health care providers more money.”

Todd Leader, who wrote a book based on his experiences reforming the mental health system in the former South Shore health authority, agrees money isn’t the whole answer. “Unless we change the fundamental principles it’s based on, and the priorities it’s based on, we will still have a dissatisfied public.”

Among Leader’s suggestions based on reforms on the South Shore, get rid of automated telephone systems that ask people to key in different numbers for different services, and instead have a real person answer a single phone number and then be able to book an appointment with the right professional, on the spot. A province-wide, live-answer phone number is one of the measures Stephen McNeil’s Liberal government, now running for reelection, has promised to implement.

Some of the biggest potential for change may be in how service is delivered, experts believe. One aspect of that is pushing more mental health care into family doctors’ offices, instead of quickly referring people to the formal mental health system or up the line to scarce psychiatrists.

“Right now what is happening is people with all these different kinds of needs are all heading to special mental health services,” says Kutcher.

“There has also been an expectation on the part of Nova Scotians that everyone needs a psychiatrist for life, if you are in the system, and if not for life for a very long time,” she says.

“We have all sorts of specialists seeing people for extended periods with no evidence of that resulting in improved outcomes, and yet we have all sorts of people waiting on our waitlist who can’t come into the system because it is filled up with people who perhaps don’t need to be continuing to receive treatment.”

One of the approaches Nova Scotia is trying is to develop collaborative care teams in family practices that include nurses and other professionals, as well as doctors. They can then take some of the load off the physicians. In April, the government, now seeking re-election, announced 12 new nurse practitioners and 10 family practice nurses would be added in a range of rural communities, to help fill some of the gap.

Doctors Nova Scotia, the organization that represents the province’s physicians, recently participated in a study in which 50 doctors were trained using a mental health module developed in BC. According to spokesperson Kevin Chapman, the doctors who participated found it improved their ability to deliver effective services. The program’s funding ran out, however, and the organization is now looking for ways to find the money to revive it.

Dr. Michael Teehan, head and clinical chief of Dalhousie University’s psychiatry department, says solving the problems that beset mental health care away from major population centres will take time. “It’s a lot more difficult to do that in places where not only they lack those resources, and where people are to the pit of their collar on the frontline just seeing patient after patient, and having very little time to think about how could we make this system better,” he says.

“So the hope is that the planning at the provincial level, we have the time to do that and we have hopefully the right people to evaluate and look at how to make the changes. But it’s a difficult task. It’s going to take a decade, I’d say, if we get it done right.”

Mental health expenses are largely about people—the therapists, doctors and other professionals who deliver the care. And people cost money.

Kutcher agrees that mental health care has a long way to go, and compared to physical medicine, has really made very little progress. “Forty years ago we were faced with this horribly challenging vexatious, uncertain, catastrophe in health care. It was called HIV/AIDS, and that was a death sentence. Now you can live a full and constructive and healthy and constructive life, with HIV/AIDS,” he says.

“But what have we achieved in the mental health area? Nothing like that, not even close, and when you look at what happened with HIV/AIDS, there was a humongous amount of funding put into this research to try to figure out what was going on and how to address it. None of that's happening now” in mental health.

11 things that changed Sunday around COVID-19

Rolling out the red carpet