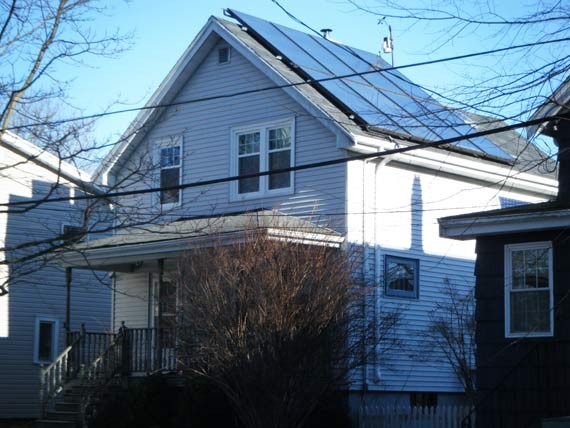 HRM Communications
If the offer's shunned, you might as well be walkin' on the sun.

For the moment, MacLellan is Halifax’s manager of energy and the environment. Soon he'll be leaving the city behind and taking a position as CAO for Queens County.

MacLellan leaves behind the Solar City project he helped foster, but he isn’t the only driver no longer at the wheel. Julian Boyle—previously HRM’s energy manager, planning and development—left the city in May to become electric utility manager for the town of Lunenburg. Greg Keefe, Halifax’s now-retired CFO, also left city hall in June.

No one has yet been hired to replace any of the three employees [Update: Except in Keefe's case], but searches are underway say city spokespersons. The staff turnover won’t impact Solar City’s longterm strategy, says a humble Richard MacLellan.

“The project’s still under development. We’ll just be a blip in the road.”

Solar City partners property owners with HRM to pay off, via property taxes, solar panels installed on their homes. There’s no direct cost to the city, and potentially large energy savings for the homeowner.

Now, the program is navigating what MacLellan calls a “slow launch” over the summer, as it gears up for expanded offerings into solar thermal heating and electric. That means a new rollout and new tender solicitations for solar panels. Dartmouth’s Thermo Dynamics Ltd. was the manufacturer and installer for the project’s pilot phase, with help from subcontractor Doctor Solar (a division of Scotian Renewables Inc.).

“We’d always expected we’ll finalize what we offer in the fall and offer it then,” says  MacLellan.

To bolster those efforts, HRM has partnered with Dalhousie to create the first city-level solar map in Canada. Residents can figure out the solar potential of their properties using a colour gradient, before booking a more thorough (and free) Solar City assessment.

The city also has some online monitoring available for civic properties enhanced with solar panels. For instance, here you can see how much power the Common Pavilion is saving (and how much CO2 has been avoided) over the past day, month and year.

“We always balanced a bit of a fine line in terms of marketing, selling something or just offering,” says MacLellan. “We’re always quite conservative in our approach to marketing, promotion—particularly in the pilot.”

Employed for HRM in various roles for the last nine years, MacLellan has been lauded for his efforts with sustainability awards from the the Union of Nova Scotia Municipalities and the Federation of Canadian Municipalities. He starts his new job later this month.