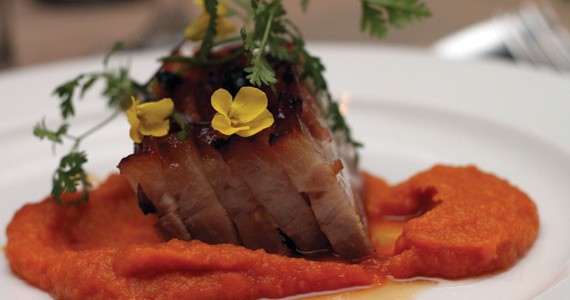 The coiled fronds of fiddleheads are like leafy green fingers, beckoning warm weather ever closer with the curl of each leafy stem. With its wild, green flavour, this young fern is the perfect ambassador for each spring's new harvest. It's also a perfect ingredient for Slow Food Nova Scotia's Spring Supper.

Last year, Graeme Ruppel---then the chef at Brooklyn Warehouse, now the force behind Coastal@NIGHT---paired fiddlehead mustard pickles with a beef short rib braised in Garrison Irish stout. This year, Renée Lavallée---The Fiesty Chef---hopes to pull from the crop at FiddleHop Farm in Glenholme for a dish that will also incorporate some luscious local pork belly from Oulton Farms.

"There have never been more chefs involved than this year," says Michael Howell, president of Slow Food Nova Scotia.

All told, there are 11 chefs working on seven courses. "One could argue that in our day jobs that we compete with one another," says George Christakos, owner-operator of Halifax's Brooklyn Warehouse, and one of the dinner's coordinators. "But in an event like this everyone is very buddy-buddy--- competitors get to hang out for a night in a really positive environment."

"I truly love this event," says Lavallée. "Not only for the fact that we all showcase our favourite producers, but that as chefs we get to spend an evening together working side by side, talking, drinking, eating and joking. It is more of a social atmosphere for me as I get to work with my peers, and serve some outstanding Nova Scotian food. I look at it as the 'prom night' event of the year, though I will not be wearing a puffy dress."

Christakos is a fan of the camaraderie of the chefs, as well as the convivial setting for the guests. "The vibe is friendly and inclusive---it's very communal. After a couple of courses the person three people away will be pouring your wine. It's really laid back, really fun. And because you're not being distracted by crystal chandeliers, a sommelier and blah-blah-blah, it allows the focus to remain on the food."

"Slow food has suffered through a history of being considered high brow," says Howell. Christakos agrees, stating that there is an "idea that slow food is pretentious." "And we talk a lot about expectations," he continues. "People have some that you might not even care to meet. I think it's just supposed to be really good food. Here you can expect to see what is arguably the best of the best in terms of chefs in this province all getting behind something that is very simple.

This year's dinner will help support the Canadian Chef's Congress and Slow Food International's 1000 Gardens in Africa Project, which will help see the creation of food gardens in 25 African countries.