Sinking slowly in the city

A doctor shortage and substandard services have Haligonians beholden to a broken mental health system. 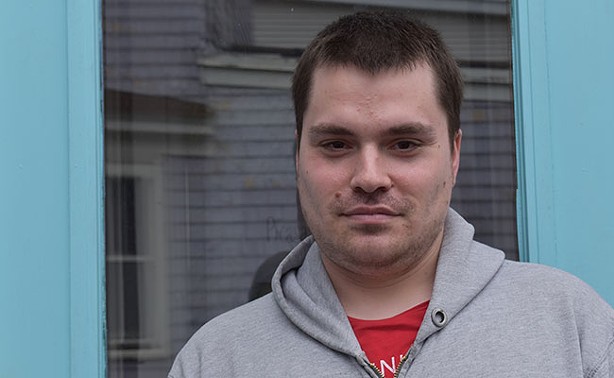 CAORA MCKENNA
Brandon Foster, 31, has PTSD, anxiety with hallucinations and severe clinical depression.
The Liberal government’s all-for-nothing budget last month promised $2.4 million to get 20 more doctors. Doctors Nova Scotia told the legislature the day before they needed at least 100 just to break even.

Last week, the King’s Investigative Workshop’s “Overburdened” series found access to mental health services for rural Nova Scotians is falling short. But even in metropolitan areas this is a problem—in the city, patients without a family physician are slowly sinking too.

Brandon Foster, 31, has PTSD, anxiety with hallucinations and severe clinical depression. The Dartmouth resident “suffered in silence” for years before he lucked out two years ago. He got into a family practice downtown, and was diagnosed at his first  appointment.

After just four months of appointments, he was given a month’s notice, 12 months of prescriptions and told, “try and find yourself another doctor.”

In February, a survey commissioned by Communications Nova Scotia found that 20 percent of Halifax residents don’t have access to a family doctor. That’s six percent more than the provincial rate. For Foster, having a family doctor meant someone was always there to check on him. Now, he’s on his own.

He’s turned to walk-in clinics for his medication. Often, he says he gets pushback from these assorted doctors over his narcotic prescriptions, which he finds “ridiculous” since he’s been using them for a year-and-a-half.

Mark Fletcher, medical director of the Family Focus Medical Clinics in Halifax, says mental health issues and other chronic illnesses need ongoing care, which is something walk-ins are not well situated to manage. At times, it’s negligent to be providing those prescriptions in an “episodic setting” because the follow-up is not available.

Fletcher says the shortage of family doctors is “devastating.” Walk-in clinics are “doing a ton of the heavy lifting” for patients in the province without a physician. The treatment options the doctor can provide are limited in a walk-in setting, and he often has to refer patients to community mental health services.

For mental health service, “the average wait in Canada is a year, unless you do it privately,” says Foster. “But if you’re mentally ill and not working because you’re sick, you can’t afford to do it privately. Community services are really the only option.”

Last week Foster heard back from a psychiatrist to set up an appointment. He’d only waited a month since his therapist made the referral. Being in Halifax “definitely makes it easier because the services are actually there,” he says.

He’s hopeful that his life might be back to “normal” in five years. But it could take at least that long before he gets a family doctor.